A Framework for Evaluating and Prioritizing Automation Projects

Automation is the new “big thing” in capital markets, but weren’t computers invented to automate the work of humans that would otherwise be done by people? Predictions of wide scale replacement of people by systems are not remotely new. In capital markets, the historical trend has been for systems to supplement people, supporting greater volumes and more complex products. So what is different about the current wave of enthusiasm for automation compared to those in previous decades? A guest post from Broadridge.

For starters, a great deal of trading has already been automated as algorithms replace traders. Another feature of the current wave is more options than ever to implement automation, including Robotic Process Automation (RPA) tools. Many modern automation tools also empower non-technical staff to automate their own processes. Advances in areas such artificial intelligence increase the scope of work that computers can do, as techniques such as deep learning literally allow computers to learn how to carry out more tasks without explicit programming and to improve upon their performance over time.

Finally, there is the need to automate. Everyone in capital markets knows the story of increased regulation and squeezed profit margins. Increasing automation offers a path to realizing the efficiency gains that firms need to achieve to remain competitive.

Surely greater automation is the simple path to reduced costs and improved control? Not always. One unchanging rule of IT is that poorly thought-out technical changes have a tendency to fail. Even in cases where the initial automation may seem successful, failure to ask the right questions up-front can lead to increasing costs in the long run. Using an automation tool, for instance, may seem the easy option but may work out more expensive than building that functionality into a core system. 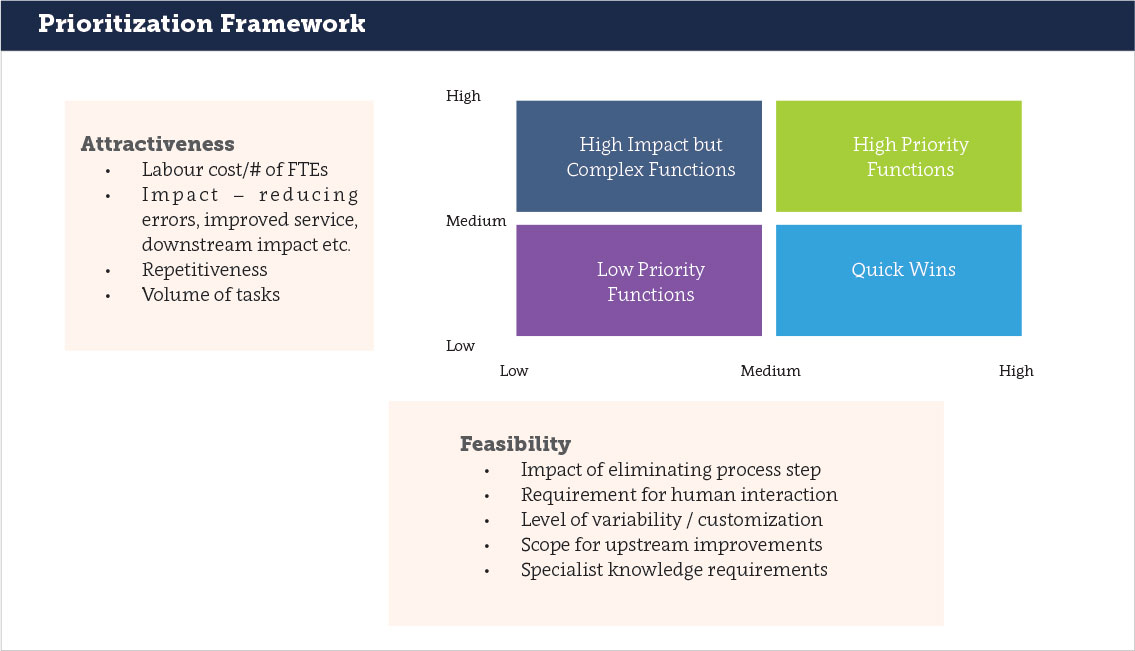 Impact of eliminating the process step
What would be the impact if you stopped doing this activity? There is always an answer to the question of why an activity is performed. However, clear thinking only really starts when you envisage what would break if you stopped performing a process step. Why automate an activity if it is not worth performing? In the complex world of capital markets, activities do persist that add little or no value.

Requirement for human interaction
Does this activity require human interaction or due diligence? Activities that inherently require interaction with other human beings or are put in place in because of the need for a human being to check processes or the performance of others are always going to be the hardest to automate. Activities involving human interaction are increasingly automated, but this is usually achieved by limiting the number of ways people can communicate with the automated “agent”.

Systems that can process natural language increase the scope of automation in this area. However, firms need to avoid the twin temptations of spending large amounts of effort and money automating low value processes or being overly ambitious in automating high value processes that directly benefit from the involvement of a human expert.

Level of variability/customization
How much variation is there in producing one unit of output? Automation in both the physical world of manufacturing and in data processing has generally been most successful where the same inputs to a process are handled in the same way to produce the same outputs. Where there is a high degree of variation in the inputs and/or a high degree of variation of outputs required from the process, it will generally be harder and more expensive to automate.

A high degree of variation does not necessarily stop automation being cost effective. However, it generally does mean you should consider steps to standardize and reduce variation as part of the process to automate.

Scope for upstream improvements
Can upstream improvements reduce the volume of work? Typically preceding most business processes is another business process. Before trade confirmation comes trade capture. If trades are booked incorrectly or fed to downstream systems incorrectly it will create more work downstream. Before embarking on any automation of the downstream process, you should ask whether there is scope to fix the real problem rather than automate the process of dealing with the symptoms.

Specialist knowledge requirements
Does this process really belong in the current team or should another team perform it? It may be more cost effective to move the process than automate it. Is the process documented and/or understood by a critical mass of people in the team? A process may seem expensive simply because a lack of documentation or experience in the relevant team causes errors.

Conclusion
Decisions around what to automate can be complex, particularly with the emergence of new technologies such as AI. However, using the framework discussed above to analyze the opportunities for automation means an evaluation of costs versus benefits (adjusted for implementation risk) will produce a far more optimal outcome.

Martin Walker is the Head of Product Management for Broadridge’s Securities Finance and Collateral Management division. Former roles include Global Head of Securities Finance and Treasury IT at Dresdner Kleinwort and Global Head of Prime Brokerage Technology at RBS Markets. He has also worked as a consultant and researcher in capital markets with several papers published. He contributed to the new book “Evidence-Based Management – How to Use Evidence to Make Better Organizational Decisions” and his first book on Capital Markets infrastructure will be published later in the year. He has an MSc in Computing Science from Imperial College, London and a BSc in Economics from the London School of Economics. He is also a fellow of the Center for Evidence-based Management.