Central banks representing a fifth of the world’s population say they are likely to issue the first CBDCs in the next few years.

In 2018, the Bank for International Settlements (BIS) and the Committee on Payments and Market Infrastructures (CPMI) asked central banks about (i) their current work on CBDCs; (ii) what motivates that work; and (iii) how likely they are to issue a CBDC. The survey showed that the majority are researching CBDCs but that much of this research was conceptual. Few thought it likely that they would issue a CBDC in the short or medium term.

One year on, the survey has been re-run. Most central banks are still working to understand the implications for their jurisdiction and a significant minority representing a fifth of the world’s population look likely to issue a CBDC very soon. This survey gives a global overview of work underway, showing that emerging market (EM) economies report stronger motivations and a higher likelihood that they will issue CBDCs. 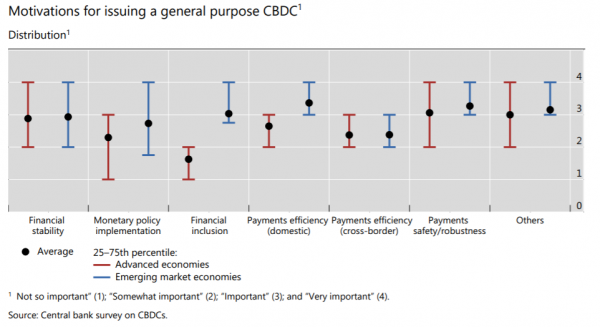