The Bank for International Settlements released its third annual survey on central bank digital currencies (CBDCs). Most central banks are exploring CBDCs and their work continues apace amid the Covid-19 pandemic. This BIS paper updates earlier surveys that asked central banks how their plans in this area are developing. The latest responses show that as a whole, central banks are progressing from conceptual research to practical experimentation.

In addition, the paper highlights that while most have no plans to issue CBDCs in the foreseeable future, central banks collectively representing a fifth of the world’s population are likely to launch retail CBDCs in the next three years. The Covid19 pandemic has added new motivations to this journey.

Over the last four years, the share of central banks actively engaging in some form of CBDC work grew by about one third and now stands at 86%. Central banks are moving into more advanced stages of CBDC engagement, progressing from conceptual research to experimentation. About 60% of central banks (up from 42% in 2019) are conducting experiments or proofs-of-concept, while 14% are moving forward to development and pilot arrangements. Not surprisingly, these general trends encompass large differences across jurisdictions and types of economies.

Wholesale CBDCs are seen as less of a priority globally compared with the general purpose variant. This is reflected both in the number of ongoing projects and in the weaker motivation indicated by central banks regarding this kind of CBDC. The distribution of priority across motivations mirrors that for retail CBDCs – notably, payments-related motivations emerge as most important. Nonetheless, there are also notable differences. Financial inclusion is a less important motivation for wholesale CBDCs, which is self-evident given its focus on transactions between financial institutions, rather than between end users.

The only area where – on average – motivations for wholesale CBDCs are stronger than for retail CBDCs is in cross-border payments efficiency. As noted previously, this assessment is underscored by ongoing central bank experiments and will be investigated in more depth as part of an international collaboration to enhance cross-border payments.

Responses to the survey highlight other important motivations for issuing a wholesale CBDC, such as development of capital markets, enhancement of cyber resilience, and improvements in securities trading and settlement. Experiments are underway for the latter. For example, Project Helvetia by the BIS Innovation Hub, the Swiss National Bank and infrastructure provider SIX, explored the functional feasibility and legal robustness of settling tokenized assets with a wholesale CBDC.

The survey finds that motivations vary across these groups for both general purpose and wholesale CBDC. While payments efficiency and safety are prime motivations regardless of work phase, those in more advanced stages take additional factors such as financial stability into serious consideration.

Issuance of wholesale CBDC is considered less likely compared with general purpose CBDC, and interest is more pronounced in EMDEs (emerging markets and developing economies). However, similar to the trend observed regarding general purpose CBDC, the survey indicates a continuing decrease in the number of jurisdictions predicting a wholesale CBDC in the short and medium term as “very unlikely” and a growing number see it as “possible” in the medium term. 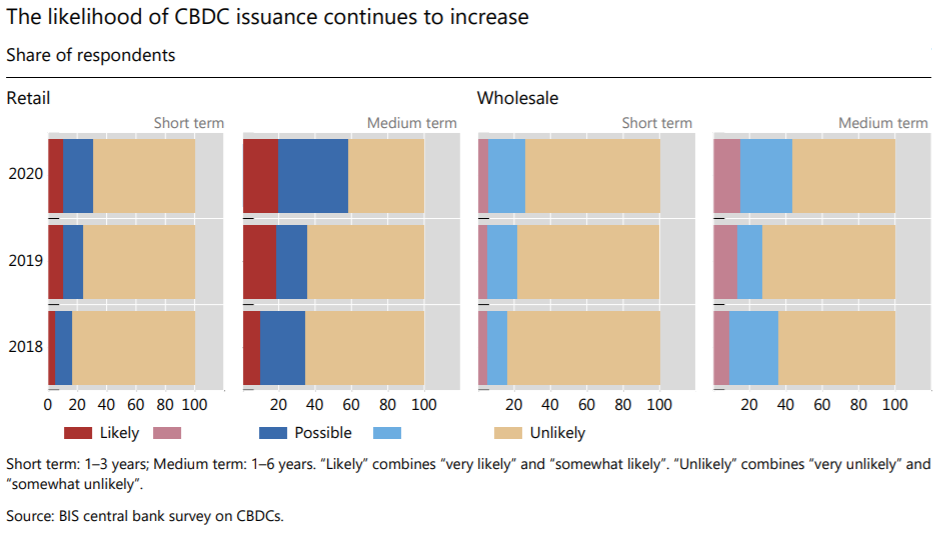 Since the first survey on this question in 2017, there has been a slow but steady trend of more and more central banks either obtaining legal authority or clarifying that they do not have it. Some 26% of central banks do not have the authority to issue a CBDC. There was no option for “laws are currently being changed to allow for it” in the 2017 survey. The continued high share of central banks who have not yet sought clarification on their mandates in this respect reflects the finding that most central banks have not advanced to development and pilot arrangements.

Could the US need a bailout? A very interesting speech and scenario analysis
12 Aug 2013
No Comments
Fed’s Brainard updates on stablecoins, CBDC and challenges ahead
19 Dec 2019
No Comments
BIS: Proportionality in bank regulation and supervision – a survey on current practices
19 Mar 2019
No Comments