While machine learning systems are advancing and capable of automating increasingly complex tasks, as well as serving as a critical tool for human operators, a critical component of artificial intelligence remains just out of reach – machine common sense.

Defined as “the basic ability to perceive, understand, and judge things that are shared by nearly all people and can be reasonably expected of nearly all people without need for debate,” common sense forms a critical foundation for how humans interact with the world around them. Possessing this essential background knowledge could significantly advance the symbiotic partnership between humans and machines. But articulating and encoding this obscure-but-pervasive capability is no easy feat. 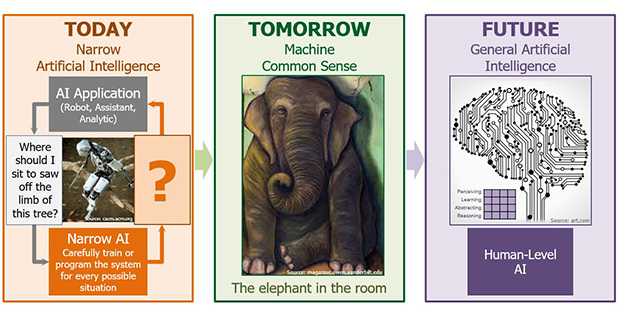 “The absence of common sense prevents an intelligent system from understanding its world, communicating naturally with people, behaving reasonably in unforeseen situations, and learning from new experiences,” said Dave Gunning, a program manager in DARPA’s Information Innovation Office (I2O). “This absence is perhaps the most significant barrier between the narrowly focused AI applications we have today and the more general AI applications we would like to create in the future.”