Cyber risk remained the number one threat to the financial industry, with more than a third of respondents (37%) citing it as the most significant risk and 69% ranking it within the top five risks, according to a new survey published by The Depository Trust and Clearing Corporation (DTCC).

However, the slower than expected negotiating progress between the United Kingdom and the European Union and the ongoing uncertainty of the outcome has positioned Brexit as a top systemic risk concern for 2019, although cybersecurity and other geopolitical risks around the globe continue to dominate the risk landscape. The Brexit ranking represents an 11% increase over last year’s survey results, making it the most significant year-over-year change in the findings. 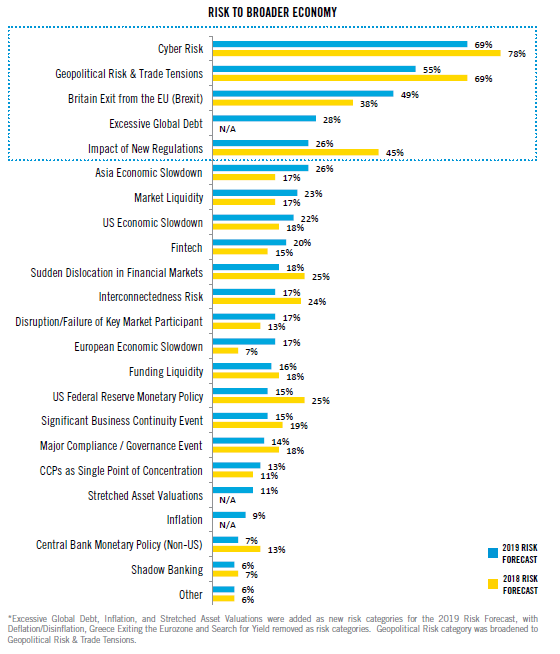 Fintech risk, along with the potential impact of economic slowdowns across all regions, also increased in importance with respondents. Fintech was frequently cited by respondents as these new technologies continue to evolve and increase in both adoption and their levels of interaction across the financial ecosystem.

“The increase in concern around fintech’s impact on systemic risk demonstrates a growing awareness of the potential risk and highlights the need to evaluate both risks and rewards associated with fintech initiatives. DTCC embraces the promise that fintech innovations hold to further mitigate risk and reduce post-trade costs,” said Stephen Scharf, DTCC managing director and chief security officer, in the report.

“But as the industry continues to adopt fintech innovations, like blockchain, AI and cloud solutions, we must ensure that those innovations do not jeopardize the safety and security of the current global financial marketplace,” he added.

The biggest change in US securities lending in the last twenty years
23 Feb 2016
No Comments
Clearlake Capital to acquire software provider Confluence
17 Jun at 10:11 am
No Comments
NLR: Analysis of SEC data reporting delay on cyber fears
14 Dec 2017
No Comments