Within community banking, there are divergent views expressed by bankers on opportunities created by fintech: while the majority of surveyed bankers viewed emerging technologies as important, a significant minority also considered them irrelevant. Consistent with this, nearly the same proportion of banks offered online loan applications as those that did not.

The observation on fintech comes from a survey released ahead of an annual Community Banking in the 21st Century research and policy conference, which is sponsored by the Federal Reserve System, the Conference of State Bank Supervisors (CSBS) and the Federal Deposit Insurance Corp. (FDIC).

“Everything we have looked at providing up to this point has had a cost that does not make it feasible with the number of customers in our market that want the technology,” one surveyed banker said. This view was in contrast to that of another banker who felt compelled to offer costly new services in order “to stay competitive.”

Another divergence, this one marked by time instead of by banker, concerned the competitive threat to community banking posed by the fintech industry. Fintech was named a primary competitor for small business loans, consumer loans, mortgage loans and deposits by the same, and relatively small, percentages of bankers as last year.

However, these percentages grow dramatically with respect to future competition, just as they did last year. The fintech future that many bankers fear has not yet arrived and may be slower to arrive than some anticipated. 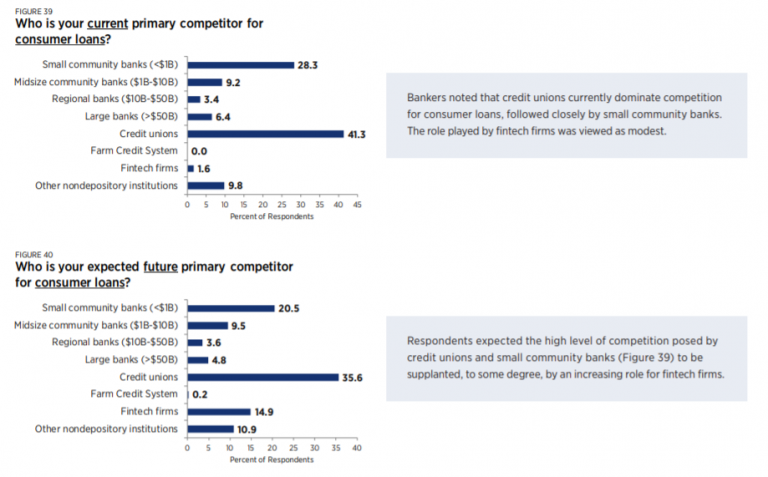 But it appears to be coming:

“The future of consumer banking seems to be as a participant in the ecosystem of lifestyle technological solutions rather than as a standalone banking relationship,” one banker said. “It’s hard to imagine what exactly that will look like and how it will change the banking business model.”

Regulators, please note: the focus on Shadow Banking regulation must be on the smart allowance of risk (Premium Content)
23 Nov 2015
No Comments
Liberty Street Economics Blog on bilateral and tri-party repo haircut differences: they can't explain it. We can.
18 Sep 2012
No Comments
PitchBook: record UK fintech growth fueled by overseas investors
1 Mar at 7:39 am
No Comments