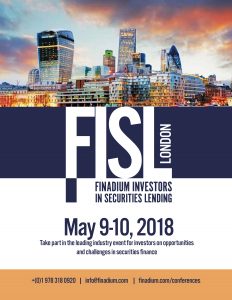 FISL London 2018: SFTR fallout will change the seclending market, so who pays the bill?

SFTR is going to change how market infrastructures work, and how that shapes up could mean new power struggles between participants. It will without question result in higher costs.

Finadium’s SFM recently covered some of the consequences of delegated reporting in SFTR, like exposing buy-side positions, but it’s hardly the only major impact the securities financing industry is going to have to think about.

For example, how does the delegated reporting model work from a charging perspective? Who is paying who? Does that get passed on to the beneficial owner or not? The borrower? And how does the borrower deal with that? Would this be an add-on service that agent lenders might charge beneficial owners, or would it be considered part of the fee split like a custody move in most cases?

These are some of the additional dynamics resulting from SFTR that the industry hasn’t worked through.

FISL launches today in NY: an interview with Finadium’s Josh Galper
3 Apr 2017
No Comments
The biggest change in US securities lending in the last twenty years
23 Feb 2016
No Comments
One golden source data repository is necessary for smart regulation
9 Jul 2018
No Comments