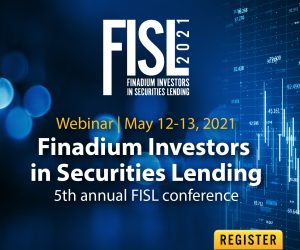 Finadium’s Investors in Securities Lending conference is fast approaching. We provide a sneak peek at what our panelist experts say beneficial owners should be thinking about as 2021 unfolds.

Securities lending came into Q2 with a strong start to the year in terms of revenues, with Q1 up some 15% year-on-year and 11% month-on-month at $2.6 billion, led by the short squeeze in the US and strong borrow demand for US treasuries, as well as corporates and exchange-traded products, according to IHS Markit analysis.

The picture that’s emerging is that there’s more reason to be optimistic about borrow demand, while the return on lendable assets has hinged on asset mix, said Melissa Gow, managing director at data provider IHS Markit: “When we look at the drivers on the demand side, we have seen directional short demand increase, as well as for corporate actions, SPACs, and a resumption of dividends, which will, we believe, positively affect borrow demand,” she said, adding that the end of short sale bans will also provide a boost.

“We know that there are always new entrants to lending and we also know that our client base continues to report more lendable assets to us. We believe the supply side increase will continue to be healthy, reflecting the value beneficial owners derive from participation,” she said. On the supply side, Gow highlighted issues such as some of the dialogue around proxy voting and recalls as part of ESG considerations; as well as political sentiment around short selling, which could lead down a path of additional regulation that may influence supply.

Non-cash collateral is another trend that’s seen a major surge since the global financial crisis, going from low single-digits to some 65% of total activity within the industry, said John Fox, a director and head of Securities Finance Sales and Relationship Management for the Americas at BNY Mellon. As part of that trend, indemnification has continued to be an important offering as part of legal agreements, and there’s been increased scrutiny around what exactly indemnification provides, he added.

Moreover, the swelling growth of lendable assets – at $30 trillion from $7 trillion in 2007 – means that it’s become pragmatic for beneficial owners to understand how attractive a particular portfolio is from a securities lending point of view, said Fox.

One of the most closely watched developments of Q1 was the great short squeeze in January that drove the most monthly equity finance revenue on record for US equities. Gow said that beneficial owners were acutely aware of the situation and have started to interrogate data more intensely, asking questions about the right levels of compliance monitoring, for example.

“We have seen an increase in demand for our risk and compliance, liquidity and collateral reporting…clients are asking us for guidance in terms of what are the best practices?” said Gow. “It goes beyond performance analysis of the benchmarking.”

In 2020, ISLA released an industry-wide standard for securities lending performance measurement guidance, intended to eliminate inconsistencies and provide a trusted methodology, an initiative that IHS Markit has been involved with. Beneficial owner clients, noted Gow, will be able to evaluate performance from an LEI (legal entity identifier) perspective; inspect restricted assets and collateral in a more granular way; and introduce new metrics such as return on assets, return on loan, and fee splits.

Beneficial owners also need to be aware of an agent’s loan distribution capabilities, many of which are dependent on proprietary tech used by agents to maximize revenues in rapidly changing market conditions, said Fox, adding that the team is “very focused on the evolution of predictive analytics” and view it as something that, in the short term, can make a difference.

What many beneficial owners don’t realize, he added, is that small tweaks to the parameters of securities lending programs can translate to meaningful increases in revenues, however, carrying out strategic changes like that are still largely dependent on the trust built with an agent and their ability to communicate those suggestions effectively.

Like much of the financial industry, the State of Wisconsin Investment Board (SWIB) is looking to continuously improve and enhance its technology and platforms for various aspects of fund management, said Chris Benish, managing analyst in the Asset and Risk Allocation Group at the pension fund. That also affects the integration of securities finance, he noted,  but the big question facing the team is: build or buy?

One of the observations Benish has made is that those firms that are “further along the evolutionary path” have often had to build their own systems, whereas securities finance newbies are looking much closer at vendors because there are more viable options than even just a few years ago.

In his role, Benish focuses on beta implementation and he noted that SWIB is more like an asset management firm than perhaps other pension funds. For example, it runs hedge fund-like strategies in-house as well as long/short strategies and, as a result, securities lending is no longer an “adjunct to custody”.

“We have long portfolios who are lending, we have short portfolios who are borrowing and there’s a win-win collateral recycling that happens to facilitate that,” Benish explained. In 2020, SWIB beat its one-, five- and ten-year benchmarks for the Core Fund, the larger of the two trust funds that make up the Wisconsin Retirement System, and had 5-year net outperformance of $1.9 billion overall.

He noted that getting to a point of signing master repurchase and securities lending agreements with another pension fund was “a lot of blood, sweat and tears” from legal, operational, and credit underwriting standpoints, and it made sense to share what was learned along the way with other firms.

This led to SWIB becoming a founding member of the Global Peer Financing Association (GPFA), launched in the summer of 2020, with the shared goal being “to create a more efficient and actionable way to increase and encourage peer-to-peer trading activity in the securities lending and repo markets for the benefit of asset owners”.

“We were looking for more ways to do business with each other,” Benish said. “There are complementary needs out there of sources and uses of collateral, sources and uses of liquidity and, from a credit counterparty standpoint, I understand another asset owner. And if they can do the same, they have marginal additional capacity to lend and borrow that we would not otherwise have.”

GPFA now has 14 members and is growing globally, with funds from Australia, Asia and Europe joining along with North America. He is keen to point out however, that it’s not about replacing existing business partnerships, rather “expanding the roster and market of opportunity”.

“We as an investor have a position in the market that allows us to take advantage of stability of capital and balances of high quality liquid assets, and we just need to figure out the best way to monetize that and the best way to meet the market where it’s at and make sure that we’re extracting the value,” he said.

Finadium: Scenarios for the Next Collateral Crisis – download a free excerpt
4 May 2017
No Comments
Equity derivatives: why scrip and rights trades have taken a hit in the crisis (Premium)
4 May 2020
No Comments
We review the OFR’s “A Map of Collateral Uses and Flows.” What is this paper telling us? (Premium)
31 May 2016
No Comments