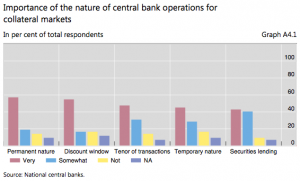 We’ve had central banks on the brain lately, so a new paper from the Bank for International Settlements, “Central bank operating frameworks and collateral markets”, was right up our alley. The paper investigates the impact that central banks have in markets for assets that are frequently used as collateral.

The idea of the paper was to determine if central banks have an impact on “private collateral markets, including collateral availability, pricing, market practices, and resilience.” It is safe to say that the generic answer is a resounding Yes. The details bear some consideration however.

The paper notes that all central bank transactions are asset swaps. That is, a bank either trades cash for securities or vice-versa, and sometimes engages in collateral upgrades that are securities for securities. The big difference between a central bank and a commercial bank is that the central bank’s ability to engage in these swaps is basically unlimited. A central bank can either change the supply of assets (ie, Quantitative Easing) or the pledgeability of assets (how much value each asset provides as collateral). We’ve spent a good amount of time on Securities Finance Monitor discussing central banks as liquidity providers. The paper notes that securities lending or committed liquidity facilities are useful tools. We’d have wondered if these might have been derided as misguided efforts due to the mispricings they create in the private markets, but no. “Securities lending facilities… can be used to offset strains from supply-demand imbalances in specific collateral assets as well as to mitigate more general encumbrance effects resulting from collateral-absorbing central bank operations. Committed liquidity facilities, in turn, can help address more structural shortages of collateral assets.”

We were surprised to see the low percentage of central banks that thought their actions important to for collateral markets. Only 60% at most saw their permanent actions as having an impact on collateral; only 42% or so saw their securities lending activities as having an impact (See Graph A4.1). While this may be true across the 13 jurisdictions that participated in the survey, it also distorts the large impact that central bank securities lending and repo have had in select markets such as the US. There, Federal Reserve lending has largely distorted the market. This report is an interesting and important starting point on expanding our understanding not just how central banks impact collateral markets, but how they view their own roles. The greater clarity that central bankers have of their activities in a world where collateral is increasingly in demand, the better off markets and economies will be.

The paper, officially submitted by a Study Group established by the Committee on the Global Financial System and the Markets Committee, is available on the Bank for International Settlements’ website here.

Previous Post
ICMA issues Quarterly Report for the Second Quarter of 2015
Next Post
SunGard: Collateral Optimization: The Next Generation of Collateral Management?