ISSA (International Securities Services Association) released the results of a survey of asset owners and investment managers on distributed ledger technology. The aim of the survey was to find out where they are on their journey towards DLT based investments, such as tokenized assets and cryptocurrencies, as well as validate what they want and need from the securities services industry.

The challenges to actively invest in digital assets showed no surprises with roughly 60% of the respondents stating that “unclear regulation” is a show-stopper in respect of investing today. The lack of trusted service providers was voted as the next highest barrier, with just over a third of the respondents saying it was a show-stopper. This shows that there is an opportunity for the securities services industry to address.

The respondents uniformly wanted help in all aspects of their journey into digital assets. The services that are required include: technical services like keys management/custody and security; business services such as consulting, brokerage and custody; and infrastructure/governance services such as notary, DLT network governance and node management.

There was no specific attribute of a firm that correlated to whether they would be actively engaged or not. There was positive engagement from firms of all sizes, AuM brackets and different geographical reach. 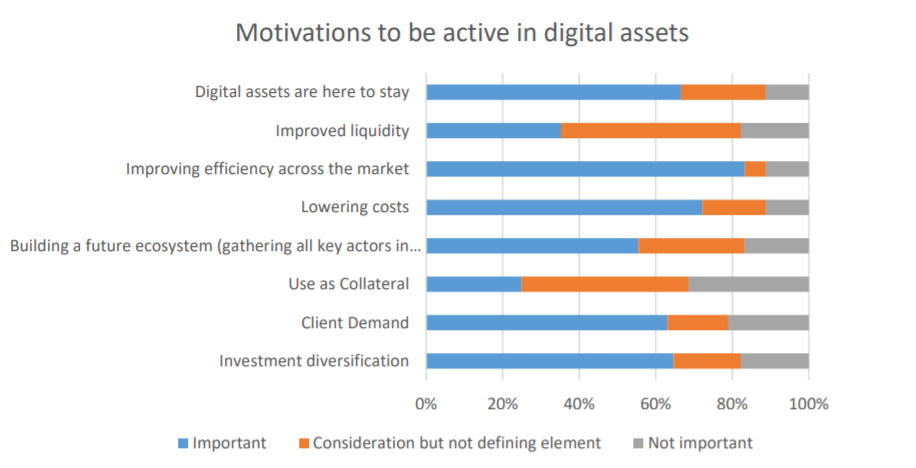 27% of respondents stated that they were already active in digital assets and another 13% thought that they would be trading them within the next six months, i.e. 40% of the respondents are engaged or soon to be engaged. Of the remaining 60%, roughly 50% (30% of the whole sample) had no plans to invest in digital assets and the remaining firms have a strategy to invest but no plans to do so within the next two years.

To drill into what DLT based products the firms were investing in, or intending to invest in, the survey asked about specific assets. The responses showed that the spread of assets that firms were invested in is wide. Bitcoin continues to be the asset preferred by the respondents with the highest 20% of them currently actively invested. 13% also have exposure to other currencies like ether, etc. and same for crypto derivatives.

There was a slight tendency towards “Other tokenized investments”, which upon clarification turned out to be tokenized funds. Crypto funds or crypto ETFs were not more represented in the portfolios, despite earlier studies suggesting that they were being more widely utilized as a methodology to gain exposure to the asset class as they also in some cases are regulated, such as CFTC-regulated bitcoin futures.

Previous Post
Finadium announces client webinar on blockchain collateral trading platforms, asks “what is this all about?”
Next Post
FINRA consults on cloud adoption