Governments and large technology firms have long nurtured quantum research, and in the past few years have announced billions of dollars for the field. As their support has ramped up, outside investors have looked to get in early on a fledgling industry.

By the start of this year, according to an analysis by Nature, private investors had funded at least 52 quantum-technology companies globally since 2012 — many of them spin-outs from university departments. (Academics have founded many more start-ups that have yet to close deals.) Although the value of some of the cash infusions remains secret, Nature’s analysis captures the scale of recent activity. It finds that, in 2017 and 2018, companies received at least $450 million in private funding — more than four times the $104 million disclosed over the previous two years (see ‘Cash for qubits’). VC makes up the bulk of this cash. Many firms in the VC hub of California’s Silicon Valley have already plunged in, and among the rest, “most are keeping a close eye on quantum”, says Christopher Monroe, a physicist at the University of Maryland in College Park who co-founded the quantum-computing firm IonQ in 2015.

Few doubt that quantum technologies will eventually yield useful and potentially revolutionary products. Alongside government investments, hundreds of firms are rushing to invest in the field, with big names such as IBM, Google, Alibaba, Hewlett Packard, Tencent, Baidu and Huawei all doing their own research. Google has reportedly now created a quantum computer that can solve specialized problems that would stump even the best classical computer — a landmark known as ‘quantum supremacy’. Secure encryption using quantum technology is already a commercial product, as are some quantum-enabled technologies that sense, image or measure at exquisitely precise scales. 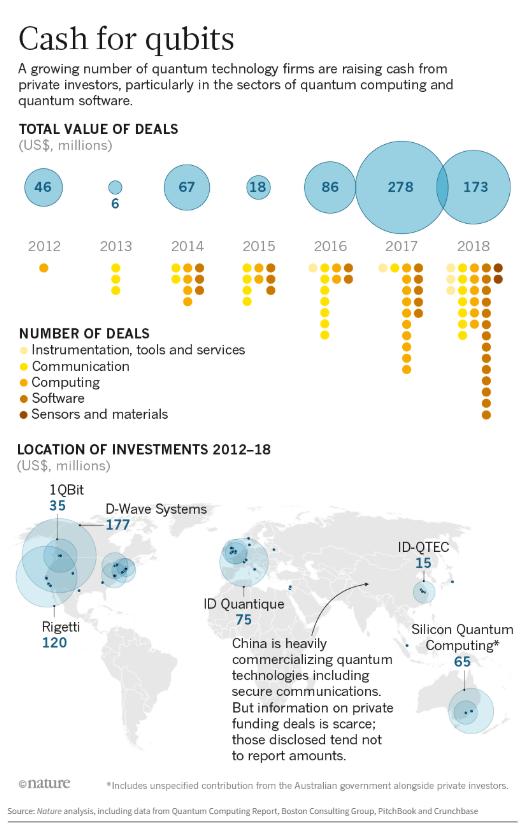 But venture capitalists tend to invest in what they hope will be game-changers, such as a multipurpose quantum computer that could handle many kinds of otherwise-unfeasible calculations. From the perspective of investors, the cash pumped into the field annually represents a small outlay so far — on a par with VC investments in artificial intelligence (AI) firms before 2010, for instance. (By 2018, US VC investments in AI had boomed to $9.3 billion.) Still, these numbers are substantial for an immature field that doesn’t yet have much to sell. Despite this, some software firms are already marketing their work on quantum algorithms, which are written for hardware that does not yet exist.

Many worry that the buzz could turn into a bubble. “There is a lot of hype right now,” says Doug Finke, a computer scientist in Orange County, California, who runs the industry-tracking website Quantum Computing Report. Quantum technologies have seen rapid progress, but machines that can tackle many kinds of computation are still likely to be decades away, and even then it will be difficult to write algorithms that harness their abilities, says Finke.

If these early quantum computers don’t emerge soon with profitable uses, the field could face a “valley of death” in which investment falters, warned a December 2018 report from the US National Academies of Science, Engineering, and Medicine. Some researchers worry about a ‘quantum winter’ similar to the ‘AI winters’ used to describe the lulls that followed surges of interest in that field. There are now hints that US firms are finding it harder to get private funding, says Finke, who notes that seven out of ten deals he has documented this year were outside the country. “There is still a lot of value being created — it’s just a case of whether there is too much hype,” says Christian Weedbrook, founder of the quantum-computing firm Xanadu in Toronto, Canada.

Several software start-ups have raised tens of millions of dollars each — including Zapata Computing in Cambridge, Massachusetts; 1QBit in Vancouver, Canada; and UK-based Cambridge Quantum Computing. Although no one is yet benefiting from quantum algorithms, some firms are willing to pay to develop them, says Yianni Gamvros, head of business development at QC Ware.

That company has already signed contracts in industries such as aerospace, which plans decades ahead, and in finance, where tiny advantages can bring huge gains. The firm is developing algorithms that, on an early quantum computer, could solve those industries’ biggest bottlenecks, he says. Many of the companies are still reeling from the impact of AI on their business. “This seems like a small investment to get ready for another potentially disruptive force,” says Gamvros.

In Switzerland, ID Quantique in Geneva installed its first short-range system for the quantum encryption of ballot information in regional elections in 2007. Now, Chinese engineers are taking quantum communications global: expanding on a 2,000-kilometre quantum link that was installed in 2014, and developing a network of quantum satellites after launching the first such craft in 2016. If quantum computers gain the ability to hack the best classical encryption, quantum encryption might prove the only route for secure communications. 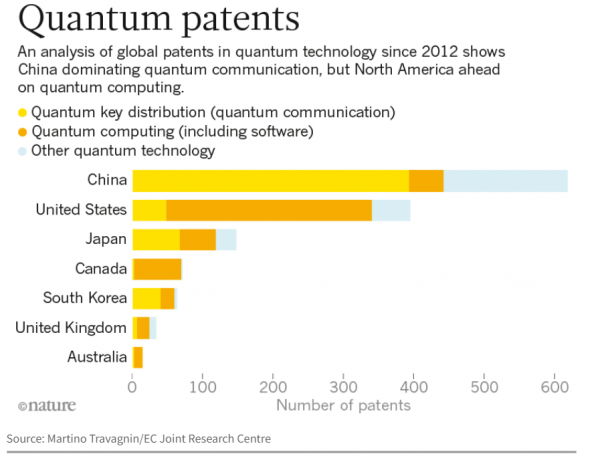 If 2019 data end up showing that private US investment in quantum technology is slowing down, says Finke, that might be because of fears of a quantum winter or the long timeline to profitability for quantum firms. Increased competition between the large number of start-ups could also play a part, or concerns that the US–China trade war might cool the economy, he adds. A hype cycle is mandatory for almost every high-tech market, says Merzbacher, who predicts that “breathless reporting and frothy announcements” are likely to die down. There are solid reasons to think that quantum technologies will create game-changing advances. “It’s a question of the timeline, rather than if that will happen,” she says.

FS-ISAC report finds global cyber threats accelerate as cyber criminals and nation-state actors converge and collaborate
10 Mar at 9:31 am
No Comments
Quantum technologies for climate change
14 Jul 2021
No Comments
Atlas VPN: government and banking account for half of all ransomware attacks
14 Apr 2021
No Comments