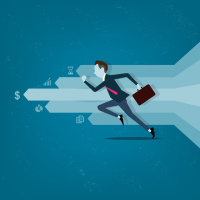 Nomura won an Insurance Risk innovation award for 2014 and we offer our congratulations. The interesting part is what they did to earn the award. This is part of an ongoing theme of creativity in and around securities finance and collateral.

“…Nomura has also developed an innovative offering whereby clients can earn premium by swapping liquid assets with the bank in return for illiquid assets, but with the nominal for the trade reducing in line with interest rate increases. This reduces the drag on an insurer’s liquidity portfolio, mitigating the effects of holding liquid assets, but means the assets are still available to the insurer if they need them in the event of a rate rise…”

This sounds like an option on a collateral transformation trade with a twist allowing for the notional to adjust along the way. We have heard that some insurance companies have looked around for these kinds of structures to hedge their collateral needs. HQLA isn’t necessarily the asset of choice for insurers – many feel comfortable with credit paper. But it doesn’t help when their securities aren’t eligible for either central counterparties or bilateral derivatives CSAs. Banks have been working on solutions, but collateral transformation can be LCR and NSFR unfriendly. Perhaps Nomura has a better mousetrap?

Behind the ideas is a perceived need for eligible securities to collateralize derivatives trades. From the article:

“…Insurers’ concerns about collateral requirements have built up for a number of reasons, not least because of a trend among banks in recent years to draft credit support annexes (CSAs), so that only a narrow range of assets can be posted as collateral. Firms are also increasingly aware of the impending European Market Infrastructure Regulation (Emir), which will mandate posting of initial and variation margin for over-the-counter derivatives – dramatically adding to the amount of collateral that insurers will have to source…”

The article interviewed Nomura’s Paul Fulcher, London-based managing director in ALM structuring, referring to a structure for a client:

“…The solution chosen was an option-based contingent funding facility in which the insurer locked in access to liquid assets at pre-determined terms going forward. Fulcher refers to it as a kind of repo market of last resort. From Nomura’s point of view, this required developing a complex model to price the optionality sold to the insurer.

The insurer pays a premium to enter into the facility, says Fulcher, but since the insurer is able to pursue a more credit-intensive investment strategy, the net benefit should be positive. For annuity firms in particular, he points out, it would be attractive not to have to carry gilts, which are capital-expensive because they do not benefit from a significant matching adjustment under Solvency II. “The funding facility also forms part of their liquidity plan, which is key to achieving approval to use the matching adjustment,” he says…”

The key will be: what are client’s collateral needs going forward? How much of it will simply be satisfied with cash? (See our June 26, 2014 post “Changing from Cash to Securities as Collateral…Not So Fast”.) Will a rising rate environment change that or will cash still be king? Looking at the amount of collateral posted to CCPs by FCMs on behalf of their clients, the numbers published by the National Futures Association are surprisingly small — $38 bio in required collateral at the end of July for the top 15 FCMs. (See our September 4, 2014 post “Required Collateral on Cleared Derivatives at FCMs has been growing, but overall numbers remain remarkably low“). We know this is not the entire universe and Europe is still getting ready for mandated central clearing, but it makes us wonder about the rants that collateral needs will be in the trillions and you better get ready for collateral squeezes. But we digress.

Once again, hats off to Nomura.