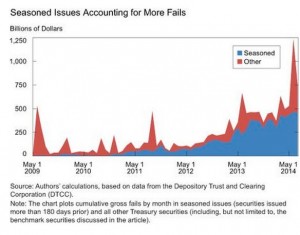 NY Fed’s Liberty Street Economics blog on repo fails. A must read for anyone involved in repo.

There were two recent posts by Michael Fleming, Frank Keane, Antoine Martin, and Michael Morrow on the NY Fed’s Liberty Street Economics blog about settlement fails. They do an excellent job of explaining the topic and recent patterns. These posts are very helpful for anyone wanting to understand the available data and mechanics of the US repo market.

Last summer some of the financial press started to see the dramatic increase in fails as evidence of a dysfunctional fixed income cash and repo markets. Repo fails, GC markets, regulatory changes, the Fed’s QE, Securities Lending & RRP programs – all were linked in the press in some sort of connect the dots conspiracy theory inevitably ending in market implosion.

Some observers, including ourselves, wrote that fails are often technically driven, temporary, and did not mean the world was coming to an end. We talked about this in a July 14th post: “The Economist writes about repo: “Neither liquid nor solid” and blames tight specials markets on regulatory change. Sorry, but no.” And on August 14th in “WSJ on repo: the news is still depressing”.

The Fed researchers have a good explanation of why fails matter in the first post, “Measuring Settlement fails”:

“…Settlement fails can create liquidity problems for market participants, introduce operational risk, and increase counterparty credit risk because they effectively extend the period before a transaction can be settled. In the extreme, widespread settlement fails can cause market participants to withdraw from the market, adversely affecting market liquidity and potentially raising the U.S. government’s borrowing costs…”

They noted that fails became less of a problem after the Treasury Market Practices Group (TPMG) imposed charges on fails in May 2009. But it has become an issue again recently.

Fail data is reported by the Fed on the weekly FR 2004 statistical release. They also release data on specific securities (as described in this Liberty Street Economics blog post from August 13, 2013 “Information on Dealer Activity in Specific Treasury Issues Now Available”). The Fed data is limited to primary dealer positions. While that is probably the bulk of fails in the market and always a good indicator of market conditions, it isn’t 100% of the world. DTCC also collects and disseminates daily fail data. Their data includes all netting members of DTCC, so the universe is broader. However there is double counting in those numbers.

For example, October 2008 Fed data showed fails peaking at just under $10 trillion versus DTCC at $16 trillion. Neither data set is perfect, but there is little question they get the direction right.

In the 2nd post, “What Explains the June Spike in Treasury Settlement Fails?” the authors focus on the June surge in fails, breaking it down between on-the-run or benchmark securities and seasoned paper. Fails tend to cluster in benchmark securities, but in June this was not the case.

“…A large number of short positions are typical for benchmark securities, which are preferred instruments for establishing such positions in Treasuries because of their superior liquidity properties and the ease with which they can usually be borrowed. In some instances, limitations in the available supply of these individual securities may have contributed to the level of fails. Nonetheless, the three episodes of fails proved short-lived, suggesting that occasional supply constraints in the benchmark issues were quickly resolved if and when they did occur…”

Ten year notes seem to frequently suffer from fails. The authors noted that this issue is auctioned quarterly, with subsequent re-openings in the following two months. The scarcity (and hence fails) is most intense just before the re-opening and is largely a technical phenomenon.

“…the ten-year note has experienced eleven episodes in which gross settlement fails cumulated over the month have exceeded $10 billion since May 2009, as seen in the chart above, and most of these episodes have coincided with the weeks ahead of the first scheduled reopening when the issue size is smallest…”

Fails are often short lived. An example cited was June 17th when $71 billion 2-year notes failed. The next day fails in the issue were, to quote the post, “de minimis”.

Fails in off-the-run securities are harder to explain.

“…These fails have tended to be small in size, frequent in occurrence, and widespread across numerous aged Treasury securities. Such fails were modest throughout much of June, but spiked higher on the June 30 quarter-end date. These fails then declined to more normal levels the next day and remained in recent ranges subsequently…” One explanation is that dealers are responding to recent regulatory changes by aggressively managing down their balance sheets over statement dates and reducing the liquidity they provide. This in turn increases fails. The Fed post said that the off-the-run fail conundrum started before the regulations kicked in. We wonder if the balance sheet consolidation that dealers have been doing for years and years around statement dates might have always been present, but exacerbated with recent balance sheet issues? It goes without saying that this problem will only be getting worse.

The Fed’s QE holdings are sometimes cited as a reason for spikes in fails. We never understood this since the Fed lends their paper out (although subject to certain limitations) and the post noted that the QE holdings in the scare paper was very small or not owned at all.

The post also said that despite the fails, market liquidity (as defined by bid-ask spreads in the cash market) did not go outside of normal ranges.

The authors do an excellent job explaining what is behind fails (and more importantly what is not). Will fails go away anytime soon? Probably no. But getting past the noise in order to have a conversation based on facts and figures is a welcome breath of fresh air.