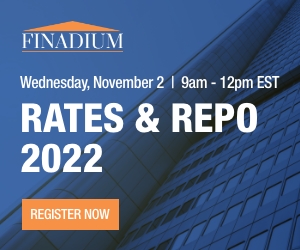 Ahead of Finadium’s Rates and Repo conference, we speak with our expert panelists about the trends affecting triparty and what kind of discussion the market is having on future-proofing business models as well as how interoperability is progressing among the major triparty providers, market infrastructures and fintech ecosystem.

Over the last year, two of the major themes for triparty providers have been optimizing collateral across different locations and digitalization, said Andrea Pfenning, president and chief operations officer for BNY Mellon Government Securities Services.

What clients want is collateral mobility, and for their triparty agent to interoperate with other triparty agents as well as with different custodians and venues. In response, BNY Mellon has tech that allows clients to mobilize US treasuries across legal entities and jurisdictions globally and is further modernizing its AccessEdge platform for easier links to other infrastructures, such as Euroclear and Clearstream for example, with an eye on fintech providers, such as HQLAx, in the future, explained Pfenning.

Finadium’s recent triparty client satisfaction survey highlighted many of these key themes, and one that stood out is the level to which clients expect agents to advance digitalization, particularly around documentation.

“Whatever we do as a triparty agent in terms of new technology development — be it a new API or a new platform, blockchain or digitizing US treasuries for example — you need both parties to manage or handle that type of process,” said Pfenning. “Are the counterparties or the market participants in triparty all equally ready to take on this new technology?”

As a case in point, she noted recent moves to digitize collateral schedules as an online self-service tool that cuts out intermediaries and paper both, but required education for the negotiating counterparties. This educational element will be true for the rollout of any future technologies, she added.

At the same time, there are also fintech partnerships to help manage greater sophistication in processing. BNY Mellon recently announced a collaboration with Pirum for the launch of an optimization service, EPCOConnect, to offer collateral providers margining, risk management and inventory management to drive improved risk-return outcomes.

“The industry is demanding greater collaboration and interoperability,” said Rob Frost, global head of Product at Pirum, adding that the topic featured heavily at a recent RMA conference and that this collaboration with BNY Mellon is an example of this in practice.

The three major themes for triparty collateral management that Frost is seeing generally relate to data becoming more real-time: straight-through processing (STP) and automation to minimize friction and eliminate fails and timing delays; knowing where collateral is on an intraday basis for both collateral providers and receivers; and collateral optimization to boost financial performance, whether that’s for regulatory capital or cost efficiency reasons.

Traditional technologies can struggle to adapt to achieve these outcomes so it is important to consider the future operating model, noted Frost. Vendors have a key role to play because as the ecosystem evolves and as more service providers come in — both traditional and  future technology (such as distributed ledger technology, or DLT) providers — there still needs to be an enterprise view of all collateral sources and uses in one place.

“You still need to be able to easily adapt your data model to consume that data on an intraday, real-time basis and to be able to do something with it,” he said.

Automation, for example, is less of a heavy lift if clients can reuse post-trade data and connectivity, but future planning means building out a strategy that can extend and interoperate quickly, otherwise firms end up with platforms that aren’t able to adapt to data and tech requirements further out.

“Whatever you do for your operating model now, have it in mind that it will evolve and there will definitely be a period where traditional assets will live side by side with digital assets,” said Frost.

US regulatory agencies have defined digital assets as assets that are issued and/or transferred using distributed ledger or blockchain technology, including “virtual currencies,” “coins,” and “tokens.” On this latter version, the process by which an issuer creates digital tokens that represent assets is often called tokenization.

One way that’s moving forward for J.P. Morgan is with HQLAX in partnership with Ownera and Wematch. This team-up has demonstrated how rights to securities, recorded in digital collateral records (DCRs) on the HQLAX ledger, and digital cash, recorded at J.P. Morgan, could be recorded and transferred using two different DLT platforms.

“Without interoperability, if everybody builds their own blockchain network and they don’t connect in one way, shape or form, then it’s actually hurting the market more than helping because it’s creating these little pockets instead of broadening the liquidity and collateral pools,” said Corral, adding that another important element of token mobility is for the market to consider having standard identifiers, like ISINs, which would mean that value is without question, much like a US treasury CUSIP.

In other words, token shareability and connected networks seems like the route that makes most sense for what the industry wants to achieve longer-term.

In the here and now, J.P. Morgan is transacting intraday repos on its Onyx blockchain platform, which can be described as early-stage interoperability with BNY Mellon via its AccessEdge platform. The mechanics function in a way that collateral providers wanting to access intraday repo funding at J.P. Morgan participate in a simultaneous exchange of collateral versus cash with the creation of two tokens: one representing the securities, the other representing the cash. The collateral provider can utilize the cash token to satisfy any intra-day cash need they have anywhere in the world.  At the end of the day, this trade is reversed and cash goes back to J.P. Morgan and collateral gets released at BNY Mellon.

Andrea and Rob will be joined by Transcend CEO Bimal Kadikar and Pirum will be represented by Todd Crowther on the panel “Developing the Triparty Business Model” at Rates & Repo, when they will discuss these and other hot market topics moderated by Finadium’s own Josh Galper. Rates & Repo is a conference for cash investors, dealers, market intermediaries, technology firms and other service providers. Register here  for online panels on November 2 and a live reception in New York on November 3.

Take a break with these three fun music videos on inflation and finance
9 Mar 2021
No Comments
Does fintech or political protectionism have the upper hand in the globalization of financial markets?
5 Jun 2018
No Comments
How to grow in the prime brokerage market for 2019 (Premium)
26 Feb 2019
No Comments