Riksbank published the results of its solution based on blockchain technology that has been developed and tested by the central bank. The objective of the project is to test a proposal for a technical solution to increase the Riksbank’s knowledge of how an e-krona could function and be used as a complement to cash.

The tested solution is based on distributed ledger technology (DLT) and a blockchain technology where the e-krona take the form of ‘tokens’, digital units containing information on value and origins. The first phase of the pilot has resulted in an e-krona network based on R3’s Corda blockchain platform in an isolated test environment.

Central parts of the system have been simulated during the first year, such as liquidity supply via the Riksbank’s settlement system, RIX, and participants in the network with the role of distributors of e-kronor. The simulated participants, end users and payment instruments (mobile app, card and smart watch) and their functions have been tested by the Riksbank.

The main purpose of the pilot project was for the Riksbank to increase its knowledge of what form a central bank digital currency might take and showing in a test environment how this e-krona could be used by the general public. However, as yet there is no decision on issuing an e-krona, on how an e-krona might be designed or what technology might be used.

In a new report the e-krona pilot project presents the lessons learned from the first phase of the project, including: 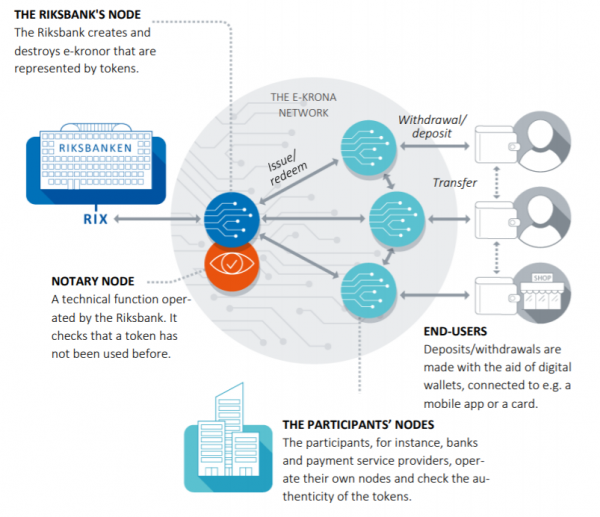 A fundamental principle is that the Swedish krona always has the same value, regardless of whether it is in the form of physical cash issued by the Riksbank, an account balance with a private actor or a digital e-krona issued by the Riksbank. The exchange from one to another shall always be on a one-to-one basis.

Having a token-based e-krona, which can only be created by the Riksbank, gives it certain attributes similar to physical cash. One such attribute is the possibility to store tokens locally with the end user, which differs from the digital money stored in accounts today, and this creates alternatives for how the solution could be implemented.

The focus for phase 2 will be to include potential distributors of the e-krona as participants in the network in order to test how an integration with their internal systems could function with the e-krona network. The central bank will also investigate further the solution’s ability to store tokens and their keys in different ways, and the capacity for off-line payments. Continued testing of the solution’s performance for retail payments will also be prioritized in phase 2.