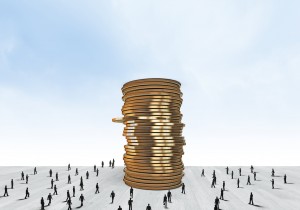 The SEC recently released their Form ADV data on investment managers including a large number of hedge funds. The data err on the side of conservatism in non-disclosure and can be compared to what the SEC has released so far on Form PF. More than anything, the ADV data raise the question of what is a hedge fund in 2015.

For those not in the know, Form ADV is a required submission by US Registered Investment Advisors with over US$25 million AUM. Since Dodd-Frank, hedge funds that are not exempt for whatever reason have to file Form ADV as well. This means that any large asset manager has to file. That’s the end of the logical process however. Form ADV requires publication of regulated assets under management, which means the actual NAV without consideration of derivatives or netting.

According to the Form ADV filings, five firms in the top 100 are what we might consider hedge funds (bars in red). But BlackRock and PIMCO are there too, as well as many other firms that employ leverage in some form or another. “Liquid Alternative” mutual funds and unconstrained bond fund managers are our best examples these days of blurred lines, and pretty much every fund complex is running these. How then should hedge funds be called? As far as these data are concerned, they are just Registered Investment Advisors, also known as, asset managers. They, like others, simply use leverage. We also note the steep drop in manager AUM, starting with Vanguard, but these numbers have a caveat below. The caveats are that Form ADV data have a big omission when it comes to large firms in that each individual RIA files independently and that not everything managed by a holding company shows up on the Forms. That means BlackRock has four submissions, Fidelity has two, etc. Vanguard only has one. We combined legal entities in the same holding corporation, all of which were pretty obvious except for two that had very different names due to the underlying subentity. Aggregating the figures creates a more even slope in the left hand part of the curve (but Vanguard is still looms large in this report). The gap in asset reporting under Form ADV shows up quickly; for example, BlackRock reports on its website that it has US$4.77 trillion in AUM but only US$2.145 trillion is reported under Form ADV. For regulatory filings on derivatives and netting, Form PF is supposed to take over but the data are only released in snippets. To confuse matters further, Form PF requires submission of Private Fund Regulatory Assets Under Management, which includes not just AUM but any commitment with a potential capital call attached to it. The SEC published an aggregated Private Fund Regulatory Assets Under Management figure of US$8.871 trillion. That doesn’t compare nicely to the US$3 trillion or so reported for hedge funds globally (including some US$450 billion in Fund of Hedge Fund assets). It is unlikely that we will see official data on hedge fund holdings and leverage for individual funds any time soon.

China and Japan are holding fewer US Treasuries. What happens next?
21 Nov 2018
No Comments
J.P. Morgan’s Paul Wilson on why participate in Finadium’s Investors in Securities Lending Conference
13 Feb 2017
No Comments
Fintech trends with implications for securities finance and collateral (Premium)
20 Jun 2019
No Comments