Tru Technologies has partnered with global business information provider IHS Markit to improve the manual securities lending process and reduce the potential for naked short selling in Korea. As part of this effort, Tru announced that it launched a commercial version of TruWeb equipped with securities lending data from IHS Markit, making it the first company in Korea to introduce systematic securities lending.

Tru’s system prevents erroneous transactions by improving the manual process of borrowing and lending securities, while the data provided by IHS Markit enables users of the so-called “blind market” to trade systematically at an optimal lending fee. 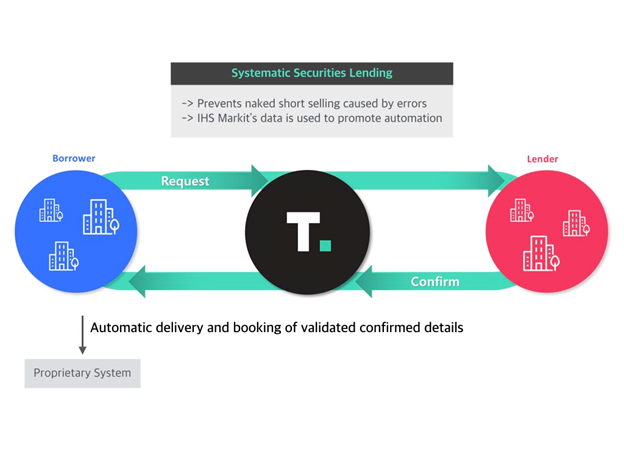 Over the last couple of years, naked short selling has become a social issue amongst the retail population in Korea, and there have been several incidents which disrupted the market, leaving investors uncomfortable with this practice. The Securities and Futures Committee under the Financial Services Commission announced that it had decided to impose fines on four foreign companies for violating Korea’s short selling law by not having a borrow in place. In order to solve this problem, the country’s financial authorities and politicians are reportedly seeking ways to strengthen penalties for naked short selling.

However, the argument is that merely strengthening the penalties for naked short selling cannot fundamentally solve the problem.

Jae Woo Ha, the CEO of Tru, who previously worked as a securities lending trader at Morgan Stanley in Hong Kong said in a statement: “Most, if not all of the naked short selling incidents are due to errors that occurred in the lending transaction process. They are caused by a manual process using, for example, online messengers.”

To solve the problem, “the financial authorities have considered an option of imposing a real-time position check prior to each sale. However, this will inevitably cause a delay in execution and will have a negative impact on the overall market. By simply removing the manual process in securities lending, it is possible to prevent naked short selling.”

“In the overseas markets, such as the United States, Europe, and Hong Kong, systematic securities borrowing and lending is common. It provides built-in trade validation and prevents errors in the securities lending process. In addition, it allows prompt execution of multiple transactions through the use of market reference data, including an average lending fee,” Ha said in a statement.

Karen King, APAC head of Equity Business Development at IHS Markit in Hong Kong, said in a statement: “Through the partnership with Tru, we are able to provide our global securities lending data to more domestic institutions in Korea. This data lowers the information barrier allowing participants to better manage inventory, eliminate manual negotiation, and improve the operational process, enabling safe and prompt securities lending trades.”