Bank of New York Mellon targets DTC-cleared paper in the next step in tri-party reform. This one is going to hurt.

Bank of New York Mellon (BNYM) has told their tri-party customers about the next step in reducing the systemic risk….and some market players fear it will create some nasty unintended consequences. Maturing tri-party trades with collateral that clear in the Depository Trust & Clearing Corp. (DTC) will have to be pre-funded. This will impair the ability to fund corporates, equities, money markets, ABS, Private Label CMOs, and muni bonds. It may limit the number of banks/broker/dealers who can offer financing.

BNYM and JPM Chase have been under increasing public pressure to fix the unwind/rewind process in tri-party repo. That’s the procedure where tri-party repo trades mature in the morning and are put back on the books in the afternoon. In the middle, the clearer banks have the risk. The Fed is concerned that this concentrated daylight exposure – now about $1.72 trillion – has the potential to create systemic risk. It is a lot of money. Given BNYM’s dominate market share in tri-party clearing in the U.S., it is particularly scary for them. The unwind/rewind process has been shortened dramatically – trades now unwind at 3:30pm, instead of closer to 8:30am before, and rewind an hour or so later. But the Fed is still not happy. They want the unwind/rewind to be “an operational moment in time” (a/k/a virtually instantaneously). Market participants are at a loss how it can be done. BNYM is working on it, but the timeline presented to the Fed was reported in years – and the Fed was livid.

BNYM has chosen to focus on DTC-eligible collateral (as opposed to US Treasuries, Agencies and other paper which clears through the Federal Reserve). DTC-cleared paper represents about 15% of the total tri-party financing done in the market. Below is a table from the NY Fed on composition and concentration in tri-party repo. Again, DTC-cleared paper includes ABS, CMO Private Label, Corporates (IG and non-IG), Equities, and Money Markets. 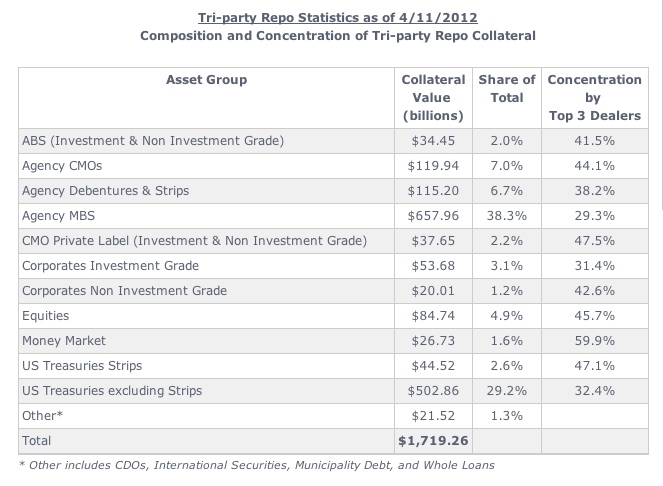 It seems a small part of the pie — if you can call $250 billion minor. Why pick these instruments? They are seen as the riskier part of the securities spectrum. By locking down this risk, it will make the Fed happy. But others won’t be so overjoyed.

If DTC-cleared trades need to be pre-funded, that means the cash has to be in BNYM before the deals mature. But from where? The dealers who have borrowed cash to fund DTC settled instruments probably don’t have it sitting around – after all, they are leveraged by their nature. They are going to have to borrow it unsecured. But wait, doesn’t that mean the leverage in the system is simply pushed around? Yes, but the concentration at the clearers goes down. We should note that the pre-funding knocks in when a deal matures. So the longer the maturity of the financing (and the trend has been going that way), the less frequent the problem. But the pre-funding requirement is also in place for collateral substitutions, which could be very frequent and unpredictable.

Who will be able to access this kind of unsecured cash, even if just on a daylight overdraft basis? It’s a small group – limited to large global banks. Many of those banks have forced their broker/dealers to use tri-party, often at a greater expense than simply using unsecured cash, because they want to avoid tapping into their unsecured cash. There will be a push/pull between the broker/dealers who will need the cash to grease the settlement wheels and their Treasury folks who want to keep the keys to the liquidity held tight. So what will give? The impact will be to concentrate the financing business for DTC collateral into fewer banks – those who have the infrastructure, access to liquidity, and wish to support their cash trading franchise. It could be a small club. That is an unfortunate unintended consequence that should concern the regulators. Financing rates will go up, perhaps along with haircuts. Broker/dealers may end up rationing financing on DTC collateral and the first priority will always be to finance the house inventory. Clients looking to borrow cash against this paper will find it increasingly difficult. Without financing available, won’t the spreads on those assets go up, liquidity down?

BNYM also hinted that in the future other collateral, specifically Mortgage-Backed Securities Pools, may also be included in the pre-fund requirement.

We are not sure how competitor JPM Chase is handling the issue. But if their solution is less draconian, they might be able to finally grab some market share away from BNYM.

A link to the Fed NY tri-party data is here. A relevant post for the FRBNY blog Liberty Street Economics is here.

DVP rates and the October 2021 SOFR drop from 5 bps to 3 bps
1 Dec at 1:00 pm
No Comments
BCBS updates on jurisdictions with Basel III deviations
13 Mar 2018
No Comments
Will Greece default or won’t they? Repo traders want to know…..
23 Feb 2012
No Comments