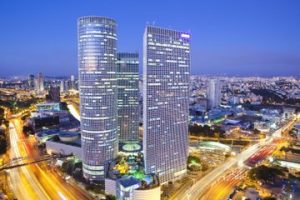 Finadium has been following the ways in which incumbent banks are managing competitive pressures from bigtech firms, with fintech collaboration generally considered an important strategy. We attended a recent conference that provided a snapshot of how some of that’s unfolding, and we spoke with Citi TLV Accelerator’s head Haim Haviv while there.

The level to which either bigtechs or fintechs are competitors remains a fairly heated debate. On the bigtech end of things, panelists were split about the realities: on one hand, experts believe that firms like Google, Facebook, Amazon, etc, are not interested in the burdensome compliance that comes along with financial services – it’s just too expensive and time-consuming.

Facebook’s digital currency project, Libra, for example, has faced tremendous regulatory scrutiny and caused some backers to drop out. Still, Google has registered a payment company in Lithuania, and commentators noted that Open Banking — which has stalled for a number of reasons, security concerns not least among them — will not gain momentum until these entities dig in. One expert from a major vendor noted that the minute Google goes in, everyone will accelerate.

Security concerns over data management are being tackled: J.P Morgan, for example, told fintechs they will be barred from accessing its customer information by the end of July unless they sign data access agreements with the bank and back a plan to stop using customer passwords to gather the data, opting for APIs instead, according to Reuters.

Some fintechs are crying foul, but experts are quick to point out that there is a clash between data privacy regulations and the expectations of data sharing associated with the open banking concept.

Meanwhile, bigtech-incumbent competition recently made headlines when a leak from Goldman Sachs indicated the firm is considering entering the cloud tech fray with a financial-services specific mindset: after all, major banks have private clouds with the latest and greatest technology. At the same time, banks need to address stricter privacy and security methodologies in order to meet regulatory and client demands — work that is still in progress.

Haim Haviv, head of Citi TLV Accelerator, said that bigtechs are certainly important to the ecosystem, but are not in a position to replace banks, speaking to SFM on the sidelines of the conference. When it comes to the incumbent-fintech-bigtech relationships, Haviv sees the present situation as closer to collaboration: “less battle and more synergy”, he noted.

There are three innovation labs established by the Citi Markets Business in London, New York and Tel Aviv, originally set up for internal innovation, and later incorporating fintechs for an external program. The TLV Accelerator is the only one operated by Citi, a spokeswoman noted.

Fintechs admitted to the TLV Accelerator tend to be at a more mature stage of development and cross both retail and institutional segments such as regtech and insurtech, security, as well as data analytics and machine learning, and are recruited to help solve problems for Citi’s clients.

As an example, Haviv described the development of identity verification, a topic that has captured the imagination of an industry looking to get rid of passwords while gaining better security, and a technology that Haviv has worked on in a previous role at Citi Accelerator for clients seeking biometric capabilities.

The priorities, Haviv explained, are about cost savings and efficiencies: about half of the cost of tech support are for password resets, he noted, and then there’s the productivity hit for clients not being able to access critical systems. But aside from cost savings, there are business opportunities for incumbents too.

“Citi is a trusted provider for financials, and follows regulations and compliance, especially around identity verification. Maybe as a trusted provider…I can develop the next digital identity solution and penetrate to healthcare, or e-commerce or other public services,” he said.

How this mindset translates across firms and business models remains to be seen, but it is a sign of the changing times amid speculation of how competition is going to shape out. Experts and industry figures at the conference pointed out that both bigtechs and fintechs are creating new marketplaces, and banks will be compelled to compete there, but also noted that when it comes to institutional segments (as opposed to retail payments, for example), incumbents remain well-entrenched.

Finadium: Does Crypto Really Matter to the Traditional Securities Industry?
September 24, 2018
No Comments
Are we close to consolidation in the collateral management technology market? (Premium)
June 1, 2016
No Comments
Finadium: Scenarios for the Next Collateral Crisis – download a free excerpt
May 4, 2017
No Comments