This paper, based on a survey to central banks, analyses the development, motivations and concerns of central bank digital currencies (CBDCs) in Africa relative to other emerging and developing regions. The interest of African central banks in CBDCs has shot up in recent times. While all of those surveyed are analyzing CBDCs, only few have projects at advanced stages (pilot or live). Some countries, in particular in East and West Africa, stand out as promoting fast payment systems through mobile money, but half of the surveyed central banks think that CBDCs can provide a superior solution.

Like their peers, a key motivation for African central banks is achieving greater payment system efficiency. In addition, a higher proportion than in other regions see potential benefits for monetary policy, an important consideration for a region where the transmission mechanism is weak. Central banks in Africa also place more emphasis on financial inclusion. These factors could foster CBDC issuance and favor adoption.

At the same time, they are more worried than other regions about cyber security risks and cross-border spillovers and are also concerned about high operational burdens. These factors and others, such as the high degree of informality that may hinder adoption, favor a cautious approach. All in all, differences in motivations, concerns and other country-specific factors determine how central banks are approaching CBDCs. 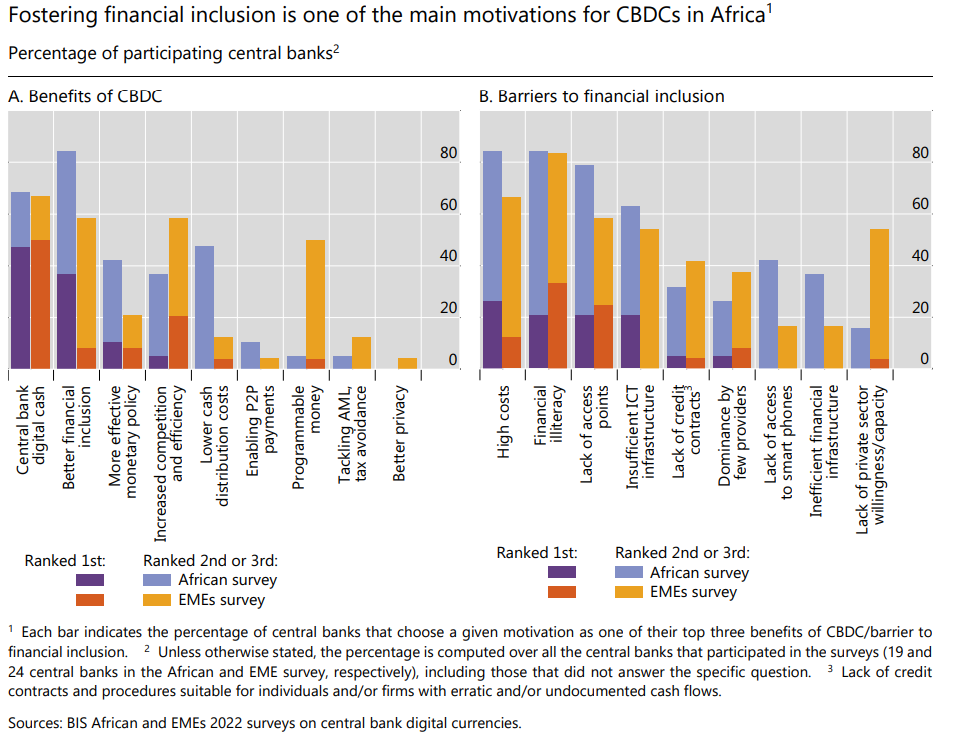 The report spotlights the eNaira, which is the Nigerian retail CBDC issued by the Central Bank of Nigeria (CBN). It was launched as the world’s second CBDC on 25 October 2021. The CBN lists several domestic policy goals for CBDC, including ensuring financial inclusion, improving the availability of and access to central bank money, and making payment systems more efficient and resilient. But the eNaira is also intended to improve cross-border payments and make remittances to Nigeria cheaper. The eNaira celebrated its first year, recording around 700,000 transactions worth over ₦8 billion ($18mn).

Previous Post
SIFMA: repo-on-DLT use cases in the context of a Basel infrastructure risk add-on
Next Post
Protos: The curious case of FTX and Farmington State Bank, aka Moonstone