Embedded in the foreign exchange (FX) market is huge, unseen dollar borrowing. In an FX swap, for instance, a Dutch pension fund or Japanese insurer borrows dollars and lends euro or yen in the “spot leg”, and later repays the dollars and receives euro or yen in the “forward leg”. Thus, an FX swap, along with its close cousin, a currency swap, resembles a repurchase agreement, or repo, with a currency rather than a security as “collateral”.

Unlike repo, the payment obligations from these instruments are recorded off-balance sheet, in a blind spot. The $80 trillion-plus in outstanding obligations to pay US dollars in FX swaps/forwards and currency swaps, mostly very short-term, exceeds the stocks of dollar Treasury bills, repo and commercial paper combined. The churn of deals approached $5 trillion per day in April 2022, two thirds of daily global FX turnover.

FX swap markets are vulnerable to funding squeezes. This was evident during the Great Financial Crisis (GFC) and again in March 2020 when the Covid-19 pandemic wrought havoc. For all the differences between 2008 and 2020, swaps emerged in both episodes as flash points, with dollar borrowers forced to pay high rates if they could borrow at all. To restore market functioning, central bank swap lines funneled dollars to non-US banks offshore, which on-lent to those scrambling for dollars. 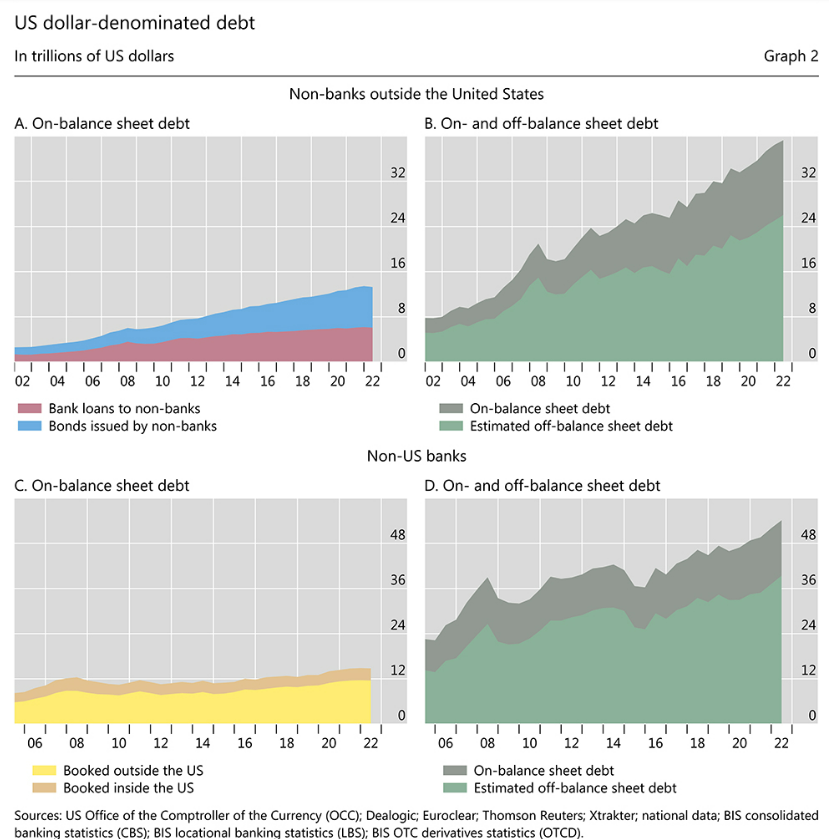 This off-balance sheet dollar debt poses particular policy challenges because standard debt statistics miss it. The lack of direct information makes it harder for policymakers to anticipate the scale and geography of dollar rollover needs. Thus, in times of crisis, policies to restore the smooth flow of short-term dollars in the financial system (eg central bank swap lines) are set in a fog.