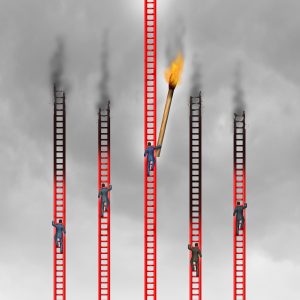 We need a new name for non-financial entities that perform the functions of a shadow bank, what are pleasantly referred to as Peer-to-Peer (P2P) lending “clubs”. These clubs are turning around and selling their loans as Asset-backed Securities (ABS) to institutional investors. Ah, but these ABS really don’t look right, and in fact might get become pretty bad news before the trend burns out.

P2P lending is one of the fastest growing segments of financial services. Indeed, before blockchain became the definition of disruption in financial services, private lending networks were identified as the leading edge. In February of 2015, PWC published estimates that the P2P market could reach $150 billion by 2025. Prosper and Lending Club made about US$11.7 billion in loans in 2015, up from nothing six years ago.. What are they really, and what problems are they starting to present? In May of 2015, Finadium published a cautious outlook on  derivatives for peer to peer loans, but some of the problems now arising are in the core of the model itself.
P2P lending platforms are best understood as loan brokers – or, more germane to our area of interest, as Shadow Banks. Those who need money use the platform to find those looking to invest money. Part of the marketability of the service is that the cash borrower need not deal with one of those greedy banks that almost destroyed the world in 2008 (and which may have inconveniently higher standards of credit than the P2P network). The cash investor gets higher returns on excess cash than are available through traditional fixed income vehicles. It all sounds fairly innovative and cutting edge – but, in the end it relies on a pretty familiar mechanism – our old friend, Asset-backed Securities (ABS).
The significant difference between an investment bank and a P2P operation is that the P2P operator does not put any of their own money at risk, nor do they take a principal role in the transaction. Instead, they sell ABS to cash investors against the loan repayment obligations of their borrowers. What a minute, wasn’t this the same class of securities that was very much at the heart of last decade’s problems? Why yes, it was.
The problems with P2P ABS are sounding more than a little eerily the same as in 2008. As we reported early in 2015, the scale of the business and professional investor interest in P2P investing has prompted both specialized analysis firms and the big ratings agencies to start tracking and rating their ABS products. After some reasonably optimistic initial ratings, on-going ratings have been falling, sometimes within weeks or months. Agencies and investors are discovering, apparently somewhat to their surprise, that as these services gain more customers and loans are made to more cash borrowers, that default rates are increasing.
If this does not sound familiar, you may not have been working in securities markets very long, and you probably didn’t own real estate in the early 2000s. This is a classic reaching for yield move.
Now, there are some that argue that lending clubs default rates are in very good shape. A data-driven article in TechCrunch last week said that “Fintech and alternative lending are now in a situation similar to that of the automobile industry at the beginning of the 20th century.” Their argument was that Moody’s was re-evaluating some P2P ABS products because it had initially made a mistake. This is possible. But lower yields from lending clubs and their willingness to lend to lower credit borrowers, then securitize those loans, is still where the focus should be, not the rating.
There is nothing inherently wrong with or questionable about the P2P industry but it should not be understood to be exempt from basic realities. There are three morals to the story: One: whether called clubs, networks, or peer-to-peer investments, these are an emerging class of Shadow Bank that is rather deeper in the shadows than real financial institutions. Two: there is a reason that banks have inconveniently high standards about the loans they make and charge risk-based rates. Its for safety in repayment. Likewise, there’s a reason pay-day loan operations are not just shadowy but even considered shady, and there’s a reason that microbanks and crowdsourcing should remain on a very small scale.
Third: most importantly, sometimes what seems like innovation is really just the same old thing with a flashier web-page. If it looks like a duck and quacks like a duck, then it probably is a duck. In this case, its an ABS with a potentially unstable repayment stream due to borrower defaults.

4sight: Buy Side Collateral Management: Challenges and Opportunities
22 Feb 2015
US short-term rates have no upper bound, and that’s an [opportunity] [problem] (Premium)
6 Aug 2018
No Comments
CME gets ready to add swaptions to central clearing. Not everyone is happy.
5 May 2015
No Comments