MercadoLibre, a Latin American e-commerce technology company, announced the closing of its $1.15 billion public offering, which includes the exercise in full of the underwriters’ option to purchase $150 million of additional shares of common stock.

The fintech also announced the closing of its $750 million concurrent private offering of common stock to PayPal, and expects to close its previously announced offering of $100 million preferred stock to VC firm Dragoneer on or prior to March 29, 2019, resulting in a total offering of $2 billion.

During 2018, MercadoLibre sold more than 334 million items, amounting to over $12 billion of gross merchandise volume (GMV). Payment transactions on MercadoPago, its payments business unit, increased by 70% during 2018, totaling 389 million transactions and $18 billion of total payment volume.

The funds will be used to continue expanding MercadoLibre’s e-commerce platform, strengthen its logistics infrastructure, and invest in inclusive end-to-end financial technology and payments solutions.

SAS partners with Nvidia on deep learning and computer vision

SAS announced it is partnering with Nvidia to help businesses bring artificial intelligence (AI) into their organizations, with collaboration across machine learning, computer vision and natural language processing. Combining Nvidia and SAS products, services and processes means customers can take advantage of high-performance AI capabilities such as image classification, object detection, speech-to-text, image recognition and sentiment detection. Specific to financial services, institutions can save trillions of dollars with fraud detection, according to a SAS company statement.

The companies are also pushing deep learning and decision-making capabilities to edge devices, which will drive greater IoT opportunities. For example, equipping an edge device like a commercial drone with AI technology will give it the ability to handle everything from infrastructure monitoring to predictive maintenance for industrial plants. With the GPU and analytics built into the drone, analysis can be performed where the data resides. Analyzing data in real-time results in faster and more accurate decisions.

The partnership with Nvidia is one strategic element of SAS’ commitment to AI and machine learning. SAS also announced it would invest $1 billion over the next three years on AI software innovation, education programs, expert services and other resources.

US Department of Energy and Intel to build first exascale supercomputer

Intel Corporation and the US Department of Energy (DOE) will build the first supercomputer with a performance of one exaFLOP in the United States. The system being developed at DOE’s Argonne National Laboratory in Chicago, named “Aurora”, will be used to dramatically advance scientific research and discovery.

The contract is valued at over $500 million and will be delivered to Argonne National Laboratory by Intel and sub-contractor Cray Computing in 2021. The Aurora systems’ exaFLOP of performance – equal to a “quintillion” floating point computations per second – combined with an ability to handle both traditional high performance computing (HPC) and artificial intelligence (AI) – will give researchers an unprecedented set of tools to address scientific problems at exascale.

Bob Swan, Intel’s CEO said in a statement: “The convergence of AI and high-performance computing is an enormous opportunity to address some of the world’s biggest challenges and an important catalyst for economic opportunity.” Climate modeling and extreme weather forecasting were identified specifically, among other applications.

FIS (Fidelity National Information Services) and Worldpay have entered into a definitive merger agreement. FIS will get Worldpay’s e-commerce and payment tech (omni-channel payment and multi-currency capabilities, risk and fraud solutions and advanced data analytics) and Worldpay gets distribution and accelerated entry into new geographies.

Upon closing, the combined company can offer enterprise banking, payments, capital markets, and global e-commerce capabilities for financial institutions and businesses worldwide, and based on the details of the deal has an enterprise value of some $43 billion.

Ant Financial had reportedly been seeking to acquire Worldpay for $700 million before FIS’ offer, which is the second largest M&A transaction announced so far during 2019. 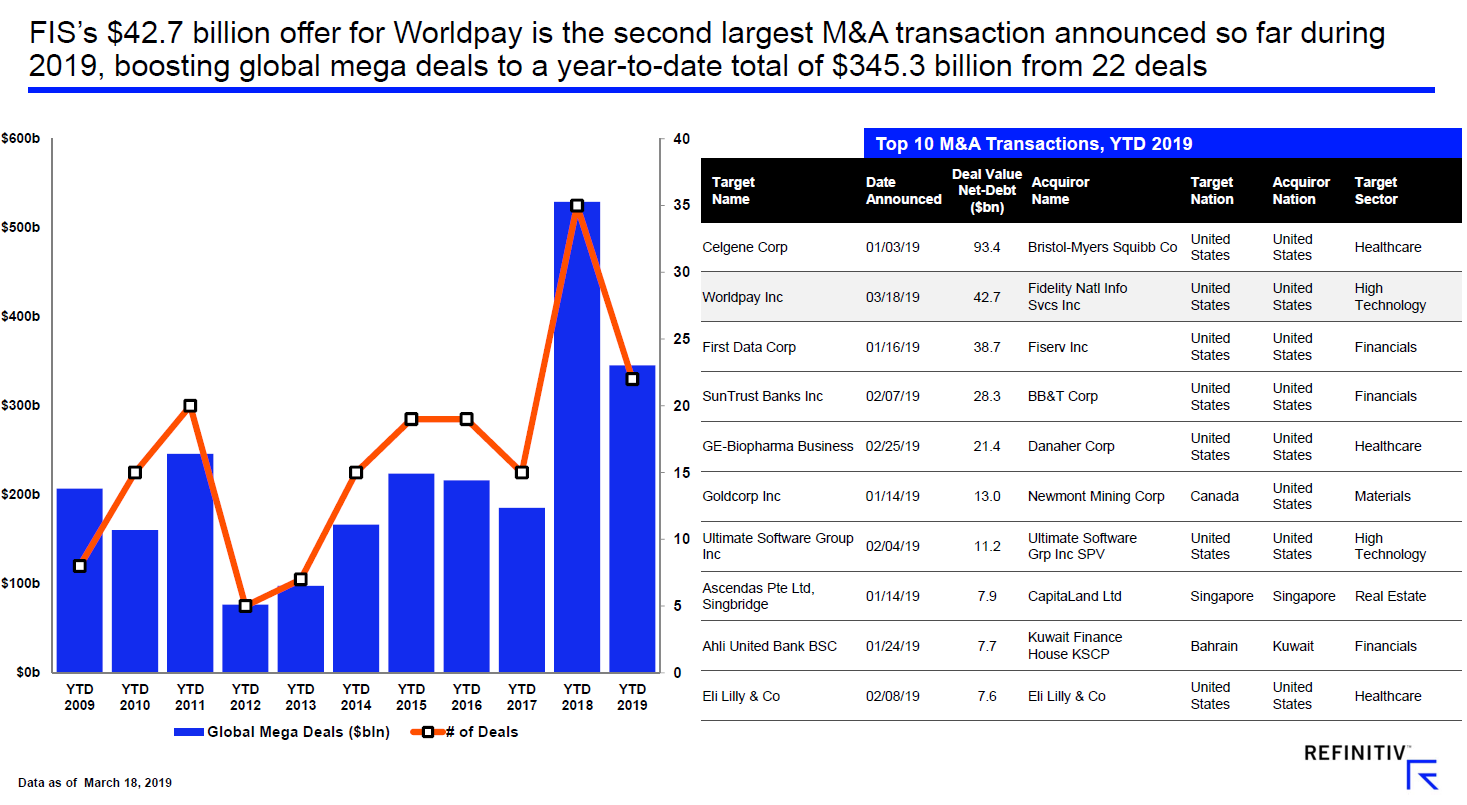 BME (Bolsas y Mercados Españoles) and Renta 4 Banco have carried out the first test for the digitization of the certification process of collateral pledge using blockchain technology, eliminating the need to use and exchange physical certificates. Renta 4 Banco is a listed investment products and services firm, and will keep working on the developments necessary with BME to allow the system to go live by the end of 2019.

The proof of concept entailed the constitution and release of collateral pledged by Renta 4 Banco to cover positions at BME Clearing, BME’s central counterparty. Blockchain-based technology has made it possible to eliminate the creation and exchange of physical certificates in these transactions, digitizing all the processes and ensuring that all participants in the blockchain have access to the information in real time.

The proof has shown a reduction in the total times of end-to-end processes of more than 80%. Moreover, the system will bring about a radical improvement in the participants’ operational and risk management as they will gain direct access to the information and participate in the validation of pledge agreements.

This proof of concept has been fully developed by BME’s DLT-Lab, through which BME analyzes and explores the use of blockchain technology in the digitalization of processes and new operational models for improving current financial processes, in collaboration with regulators and different financial institutions. DLT-Lab has worked together with those infrastructures involved in the process and the BME subsidiaries BME Clearing, the Spanish central securities depository IBERCLEAR and Renta 4 Banco as the pilot firm.

Berta Ares, head of Digital Transformation, BME, said in a statement: “DLT technology allows us to reduce times drastically and improve the operation and control of the system, providing legal certainty for electronically generated certificates and maintaining privacy and compliance with the General Data Protection Regulation”.

China insurance giant Ping An teams up with SingularityNET for AI

Ping An Technology and SingularityNET have announced an “intention” to collaborate in the field of artificial intelligence, beginning with commercial applications related to OCR (optical character recognition), computer vision and model training. In 2018, Ping An was ranked as the third largest global financial services company in 2018.

Its fintech offshoot, Ping An Technology, is a major player in China, with rivals such as Hundsun Technologies, which is backed by Ant Financial. One of the reasons behind Ping An’s rapid growth is how it utilized its first mover advantage in mobile apps to advance its market share in several industries: insurance, banking, financial services, healthcare, real estate and so on.Last month saw the launch of the beta version of SingularityNET’s platform, a decentralized AI marketplace.

With nation states such as the US considering export controls on AI, being reliant on a decentralized network for AI services is a smart hedge and carries clear advantages, according to a company statement.

As enterprises are gearing up to go beyond experimentation and exploration with blockchain technology, TCS sees the need for horizontal cross-industry platforms on which scalable solutions can be rapidly developed, the company said in a statement. The platforms will sit on the Microsoft Azure blockchain cloud and work alongside R3’s Corda Enterprise blockchain platform, while TCS’ role will be to develop and deliver application layer solutions.

The Indian firm has already identified and is developing five blockchain platforms that include, digital identity, track and trace, assets in common, asset monetization, and tokenization. Across these horizontal platforms, TCS, has identified numerous solution opportunities and is building them out by leveraging their respective customer and partner networks.

Industry application of blockchain technology is widespread in areas like management of component lifecycle in manufacturing, digital assets rights, electronic health records management, software IP protection, peer-to-peer insurance, and many more. TCS has been deploying its Quartz Blockchain Solutions for financial services enterprises, and with this move is positioning itself to actively curate enterprise ecosystems through expanded blockchain platform solutions across industry domains.

Bcause, creator of the world’s first full-stack cryptocurrency ecosystem, announced that its markets will operate on Nasdaq’s matching engine, clearing and market surveillance technology. It’s expected to go live in H1 2019 with the launch of the new Bcause spot cryptocurrency market.

The eco-system includes a digital mining facility launched in February 2018, the aforementioned spot trading for digital assets, and eventually a futures market and derivatives clearinghouse. Nasdaq’s surveillance technology is expected to aid Bcause in monitoring its markets for manipulative activities, among other misconduct.

In addition, the fintech has filed with the US Commodity Futures Trading Commission to become a designated contract market (DCM) and to establish a derivatives clearing organization (DCO).