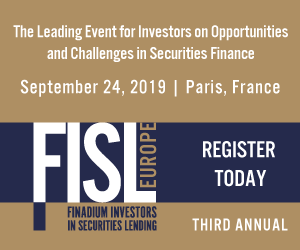 FISL Europe: SFTR is the Brexit of securities finance tech

When talking about the way that technology is impacting securities finance, the pressure of getting ready for the Securities Financing Transactions Regulation dominates the agenda because of its immediacy and dangling ambiguities.

At our upcoming Finadium Investors in Securities Lending Conference in Paris on 24 September, Bloomberg, Broadridge, MarketAxess and Pirum will discuss how the industry is tackling the ever-nearer-approaching deadline, and how SFTR fits into the greater tech story.

The problem is now urgent, and a recent survey conducted by Finadium and MarketAxess shows that the road to compliance is yet filled with major challenges. European financial authority ESMA has decided on a phased-in approach to the reporting of securities lending, repo, buy-sell back, margin and collateral financing transactions, which translates to compliance for banks and credit institutions in April 2020; CSDs and CCPs in July 2020; asset managers, alternative investment funds, insurance companies, pension funds and corporations in October 2020; and non-financial counterparties in January 2021.

This requires the reporting of 155 pieces of information, with up to 95 of those data points matchable to an in-scope counterparty. Sunil Daswani, a senior consultant for securities lending solutions at MarketAxess, said that this phased-in approach is creating a false sense of confidence, and that firms need to be aware of the state of preparedness necessary to continue doing business with any counterparties in the phase 1 net.

Phase 3 firms need to start now, explained Daswani: “You are going to have to provide the information to a phase 1 counterparty that you trade with, therefore, you need to be ready by April 2020 as well,” he said. He wrote about this, along with other observations in a recent op-ed for Securities Finance Monitor.

While SFTR does not have nearly the uncertainty associated with Brexit, it has its fair share of ambiguity: should transactions be reported even if they are not settled? And does the regulator want to see the lifecycle from pre-settlement stages? If authorities want a full view of a transaction before and after settlement, then a whole separate lifecycle event could include unmatched trades with their concomitant cancellations and amendments. This will have to be accomplished across a series of fragmented data, and is where vendors are keen to communicate their strengths.

One of the ways vendors are tackling the inherent complexity has resulted in modular approaches to front-to-back reporting hubs. An example of how that works can be seen with prematching and UTI generation, for examples. On the latter, Trax, a MarketAxess company, has created a UTI portal to set up a utility so that firms can set up one connection to deal with the requirement. It also uses a sponsored approach so that client firms can use the portal with non-client counterparties, Daswani explained.

MarketAxess’ reporting hub system uses a rules-based engine to validate transactions: is it reportable? Are completed fields in the right format? Are the dates of settlement a real value date? Is the counterparty that you are quoting also a counterparty that should be reporting? There’s also data enrichment for the 155 required fields, which can come from a proprietary database or via third-party vendors such as Refinitiv.

Certainly, some firms are way ahead in getting ready for SFTR, signing up early with vendors and investing in experienced people from the securities finance business, said Mike Lambert, product director for Securities Lending within the Securities Finance and Collateral Management business at Broadridge Financial Solutions.

One sell-side firm with an agency lending business, he noted, “got good people, they started early, ramped up the project, and now they are in a good position”. But it doesn’t follow that the most technologically advanced firms are also the ones most prepared, added Lambert: “Technology is more vendor-client relationship. A client can be very technologically savvy, but if they don’t trust the vendor, it’s not very productive.”

Where’s it all going?

There’s significant optimism that the data associated with SFTR will lead to better analytics, and even a road to greater standardization that will flow through to the Common Domain Model (CDM) proposed by the International Swaps and Derivatives Association (ISDA), which taps into emerging technologies such as smart contracts, blockchain and cloud.

Vendors are looking into it, including Broadridge, but Lambert believes that SFTR data is missing key elements, and will require significant enrichment for some of that optimism to be justified. One of the ambiguities between industry associations and regulator ESMA has been on the reporting of a financing trade: should it be a repo or stock loan trade? “The SFTR model is not rich enough to support that trade type, and therefore we are looking at how do we fit this in, which is obviously suboptimal,” said Lambert.

Still, other observers note that CDM is superior to previous attempts because it isn’t built on the buzz around the technologies themselves, rather the business processes it is meant to serve. Moreover, CDM is an industry-led solution, which may be preferable to a regulatory-led option: an observation noted by Lambert’s colleague Martin Walker, writing in our latest issue of Securities Finance Monitor magazine. Right now, it’s yet early days for any substantial progress, said Lambert: “We are investigating it, analyzing it, but I think the first step is getting SFTR on the table and make some more progress in it,” he said.

There’s a big world past SFTR: next week, we talk tech with Bloomberg’s Alejandro Perez and Pirum’s Raj Sheth. And don’t miss out on the Finadium Investors in Securities Lending Conference in Paris on 24 September 2019. The programme is free for asset managers and asset owners, and delivers best in class education and peer discussions for optimising securities lending programs.

We propose a template for US pension plan securities lending reporting
28 Feb 2019
No Comments
Two from Finadium: Modern Custodial Banks; Investing in Collateral Management
10 Dec 2014
No Comments
“What Should Repo Expect from SOFR?” Our presentation from Rates & Repo 2018 (Premium)
12 Nov 2018
No Comments