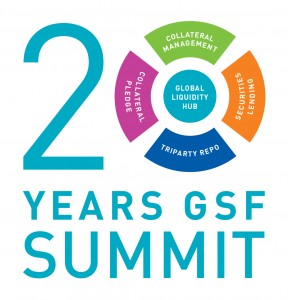 The last 20 years of global securities financing were punctuated by crises: Asian, Russian, Long-Term Capital Management, and sub-prime mortgage. At Clearstream’s 20th annual GSF summit, held this week in Luxembourg, market participants from all corners rehashed what’s been and gave some insight into what’s next.

The opening panel discussed life before the global financial crisis: balance sheet was a far less pressing issue, sell side was driven by profit while customers were driving sales to fund more positions for leverage: it was growth, it was purpose, and a lot of excitement. Repo was not only profitable but considered a safe product that could be leveraged.
As 2007 approached, the consequences started creating cracks in the system. For Ulf Bacher, currently co-head of agency cash management for Newedge (Société Générale), the first key event was related to Bear Stearns. “The market at the time was so big, and so efficient, (so reliant) on short-term funding – in the banking industry but also in (structured investment vehicles). The moment there was a crack in the system, trust went out.”
But it’s the years ahead that occupied the rest of the day. Bacher expressed disappointment that over the last decade there’s been little momentum in bringing in the buy side, including involvement in a CCP structure. “My vision for the next 10 years: the repo markets, the money markets will be there… but I think the audience will be much wider.” A push for getting corporates and sovereign wealth funds involved was highlighted.
On a more sobering note, Andreas Jobst, Senior Economist in the European Department of the International Monetary Fund, presented some research on the impact of monetary policy on repo, which has been correlated with the market becoming “very uneconomical” while cash markets have become volatile. Unprofitable repo is being cross-subsidized by other business, there is a structural transformation to collateral and liquidity management utilities, and a smaller interbank market, he noted. Rising “dysfunctionality”, meanwhile, has adverse implications for monetary policy normalization, with the ECB crowding out private repo, he added.
Godfried De Vidts, Director of European Affairs at ICAP and Chairman of ICMA’s European Repo and Collateral Committee, said there is a good chance to “correct” when regulations have gone too far, but the market needs to keep “drumming” the message into the ears of politicians that repo is the same as collateral. Damaging the repo market sows the seeds of the next crisis – that of collateral scarcity, he added.
Dominick Emmanuelli, Treasurer Capital Markets at Landesbank Baden-Württemberg, said that regulations are presenting major challenges that are balanced by opportunities, which can be seized on when management “understands both sides of the business”.
Getting through regulatory changes is the priority for now, said Michael Manna, who heads the repo desk at Barclays Europe. The future, he said, could see the market become “collateral agnostic”, where an ISIN is an ISIN. “Technology that is in the pipeline will break down barriers to allow us to be more intelligent about how we manage our collateral. If we do that more efficiently, that brings savings to our balance sheet and with that comes increasing returns.”
SocGen’s Bacher said he expected more volumes being processed by fewer people as commoditization and standardization take hold. “Automation, data capture and efficient trading will be my key push forward for the next 10 years,” Bacher said. When the audience asked the panel when the market will see the first ‘robot repo trader’, no specific time line was given. “It will happen, of course,” was the reply.
SFM will also be covering the GSF Summit’s OTC derivatives and Repo Financing panels, as well as what we heard about the impacts of T2S on CSDs over the coming weeks. Watch this space.