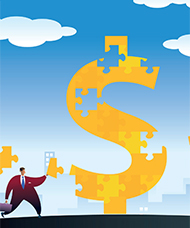 How important is netting to banks anyhow (Premium Content)?

We’ve been looking at bank quarterly filings for a number of data points, and one thing that surprised us was how different bank profiles were in the importance of netting relative to Level I and Total Assets. Some of this is self-evident given who the big players are in OTC derivatives, but the implications of which banks benefit most from netting also mean that these banks are most affected by any changes to netting rules. One bank in particular could be impacted more than their peers.

Relative to Level 1 assets, Citi, JPM, Bank of America and Credit Suisse were the big beneficiaries of netting in Q2 2014. The amount of netting benefit these firms receive is over 290%, with Citi’s figure at 700%. Without netting, these firms would be forced to curtail a substantial percentage of their OTC derivatives trading activity. Goldman Sachs and Morgan Stanley would be much less affected than their larger counterparties. Relative to total assets, Credit Suisse is again a major beneficiary, with the value of counterparty and cash netting at 53% of total assets. The other big three are under 41%. Again, Goldman Sachs and Morgan Stanley would be much less impacted than their larger peers in this regard. Our takeaway here is that of course netting rules matter, but Credit Suisse appears to be in a more sensitive position than other banks in the importance of netting compared to Level 1 and Total Assets. If netting rules for OTC derivatives were to change, Credit Suisse would be the first to feel the pinch.

On the repo side of things, four banks that publish clear data showed netting benefits of 20% to 40% of the book in Q2 2014. This is consistent with the findings of “Matching Collateral Supply and Financing Demands in Dealer Banks“, from the Federal Reserve Economic Policy Review in March 2014, but does not sync with the anecdotal reports of repo managers we found in our October 2014 report, “Netting Rules for Repo, Securities Lending and Prime Brokerage“. We buy the OTC derivatives figures, but when it comes to repo, something about the experience of managers and the reported data isn’t coming together correctly. We welcome comments on this issue.