Blockchain has a valuable role to play in securities settlements when applied to the right problem at the right point of market infrastructure. The solution is not tokenization however, rather enabling on-chain bookkeeping of securities to facilitate fast and effective cross-border settlement. To get there, we are introducing a Digital Collateral Protocol (DCP) for the exchange of security settlement information at the custodian layer. A guest post from DekaBank.

The idea of securities settlement on the blockchain has been discussed almost as long as blockchain, or Distributed Ledger Technology, has been around. It has not yet however been applied to problems the industry actually faces, but rather has been a solution in search of a problem. Applying blockchain to settlements has always been straightforward, but settlements systems have bigger problems than blockchain can solve.

To date, the main application of blockchains in securities settlement has been tokenization using a blockchain custodian. While beta projects have proven that the approach is viable, this model has gained only limited acceptance across the securities industry, and is most popular in trading between brokers only, not for clients using custodians. Market participants have proven repeatedly that they are much more comfortable with the existing custodian and Central Securities Depository (CSD) model than they are in trusting their assets to a blockchain-based custodian.

We propose a new model, the Digital Collateral Protocol (DCP): instead of tokenization, we offer to maintain the securities where they belong – at the custodian and CSD – and make the settlement layer occur between those parties in a digital representation, exactly as they are today but without the physical settlement that occurs between custodians and subcustodians. This approach would save substantial costs, be compliant with all major international regulations, and ensure fast, easy and transparent settlement between counterparties.

In today’s markets, it is easy for a trader in Europe to buy Asian securities, just as it is for a trader in the US to buy European assets or a trader in Asia to buy US assets. The doors are now open for international trading, and that works well. There is a problem when it comes to settlement however, in that the security that has been so easily purchased on a global exchange does not always land correctly in the custodial account of the buyer at the right time, and cash may be extended for excess periods while subcustodians work on the final settlement.

Functionally, the mechanism for settlement is that each buyer’s custodian works through subcustodians that have relationships in the local country of purchase. Each custodian and subcustodian uses book-entry settlement with the local CSD to enable securities movements. If two international clients trade on an exchange, each may have to work through their custodian and subcustodian to enable the exchange of cash and securities. This could involve up to five parties: two custodians, two subcustodians and the local CSD (see Exhibit 1). Any breakdown in this chain can lead to fails to deliver or transfers of cash, resulting in added risk, poor exposure management and direct costs. 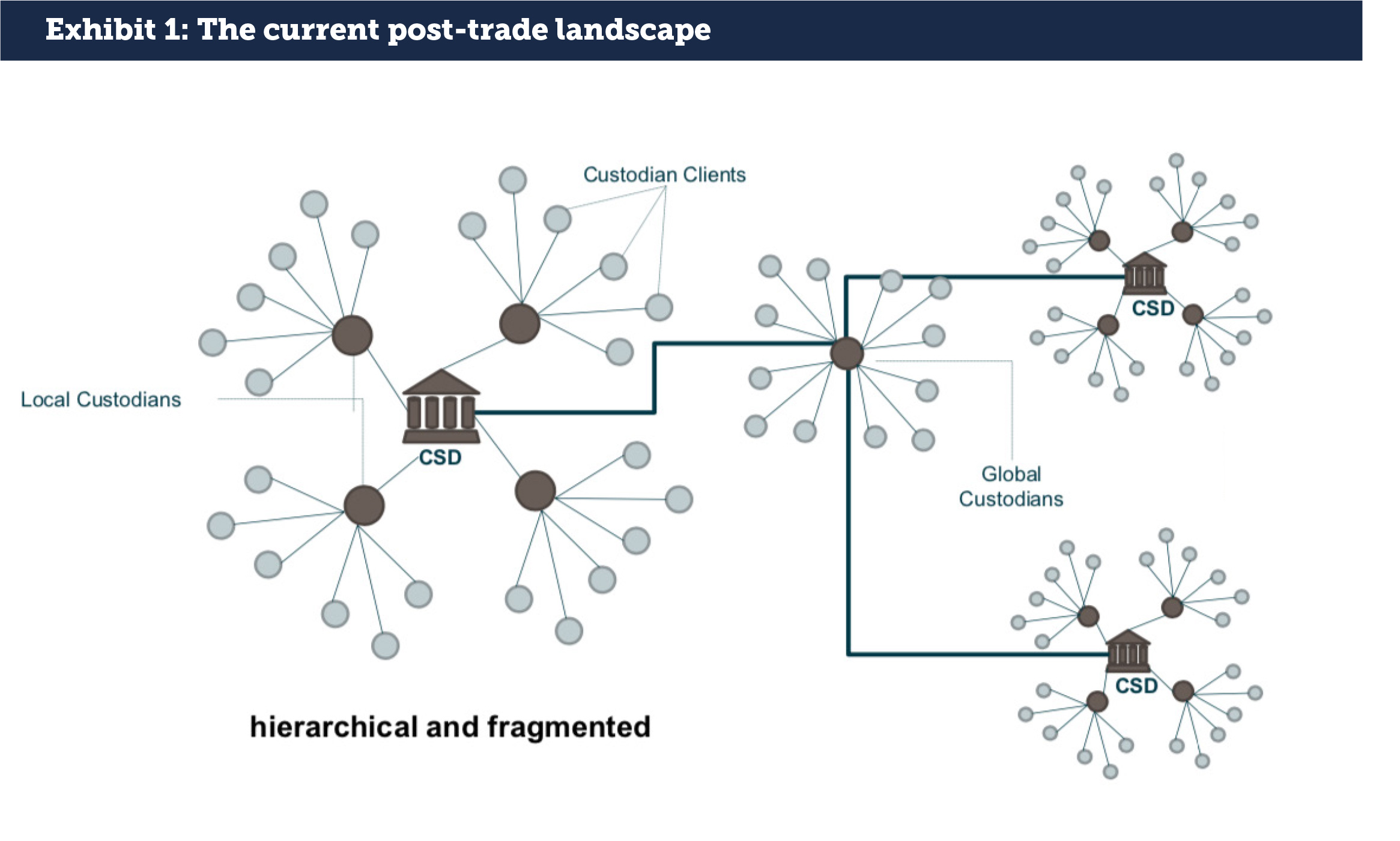 The problem in the current settlement model is that custodian actors do not typically use the same settlement model. The two initial custodians may have their own systems and are relying on their relationships with subcustodians to make the exchange of cash for securities. This may be an electronic process or one that exists on paper and faxes, even today. The lack of a global standard business protocol means that mistakes get made, even with the best of intentions.

The DCP model introduces the standardization that the security settlements industry has been lacking (see Exhibit 2). It does this by using blockchain to create one platform for global use in the book-entry transfer layer between custodians and clients, with the CSD retaining control of the final securities record as it always does. A simple onboarding of all book-entry positions by the initial custodian onto one global platform means that settlements can be conducted between principal custodians without the entire subcustody layer. This would result in a remarkable increase in efficiency. This is not a replacement of settlement activity from CSDs and custodians of blockchain, nor is it tokenization. Rather, it takes the existing procedures of depository banks and moves this single activity of settlement to a joint and common blockchain layer. The DCP does not need a security token representing a traditional security. In essence, the book entries in the back office systems of the custodians are already perfect representations of the securities in question. The issue is not tokenization, but the lack of a common and joint settlement protocol on which traditional securities can be transferred. And it is this void that the DCP fills. 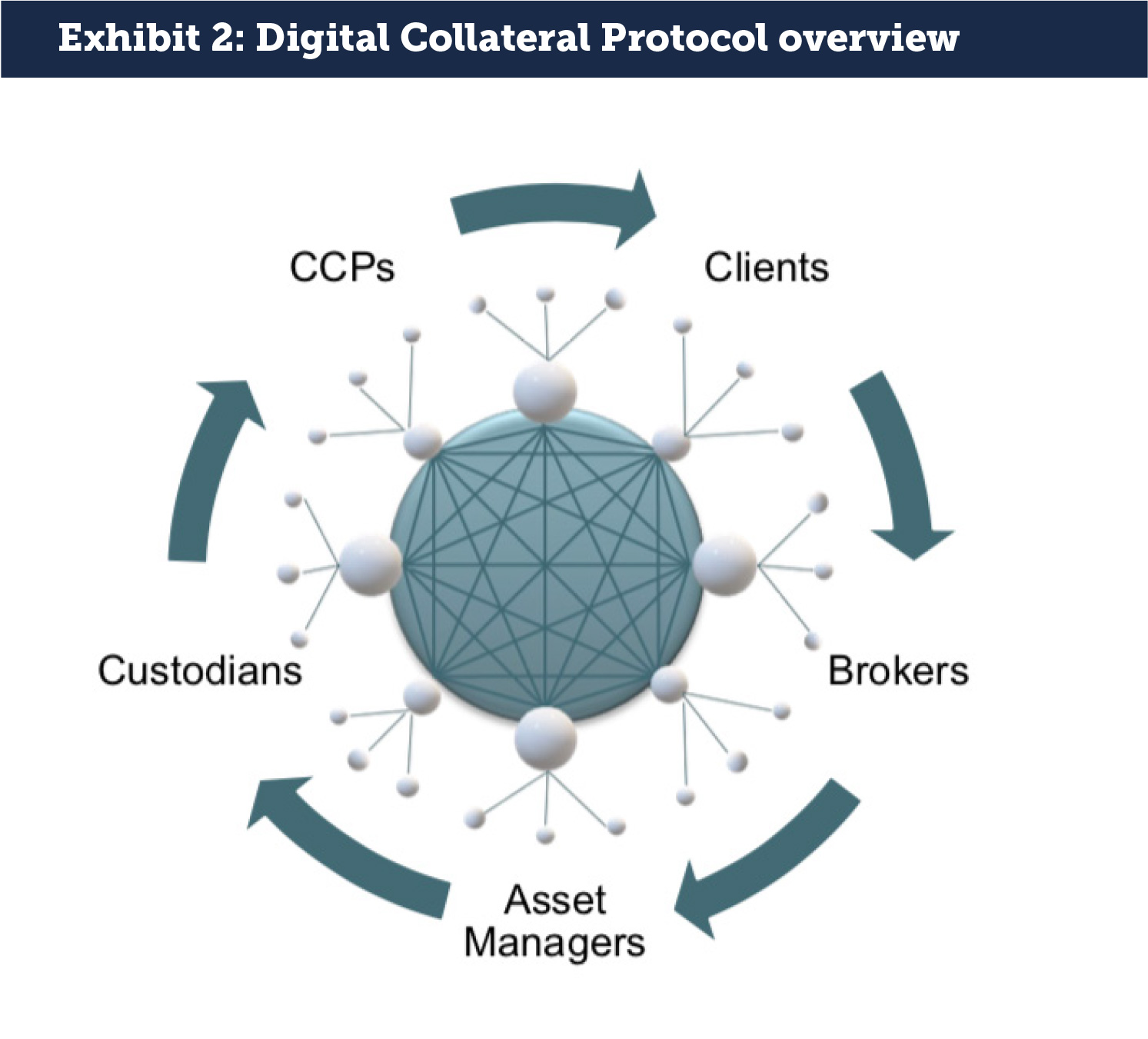 For the model to work, large depository banks would need to join the DCP infrastructure and on-ramp their positions to the blockchain (these could be off-ramped with ease later). DCP would effectively replace subcustodians, as custodians could find each other directly on the blockchain using one standard protocol, without local intermediaries and local customs for settlement.

Challenges to the business model

The main obstacle to the DCP is business considerations, not technology. The technology is now well understood in the banking community; every major custodian and CSD has been testing blockchain across custody, collateral and securities finance for some years now. Everyone knows that functionally these technologies do what they say they will do. In moving to a new model however, there will be winners and losers that will impact the economics of the business.

The winners in our model will be depository banks and clients who no longer have to pay subcustodian fees and the costs of fails to deliver. Removing this layer of cost and friction from international trading could in turn substantially increase international trading business activity. Winners would be banks that usually have their collateral at the wrong place at the wrong time as the DCP would allow for instantaneous collateral transfers. Finally, yet importantly, regulators would benefit, as the utilization of a common settlement protocol would facilitate oversight and reporting requirements (see Exhibit 3). 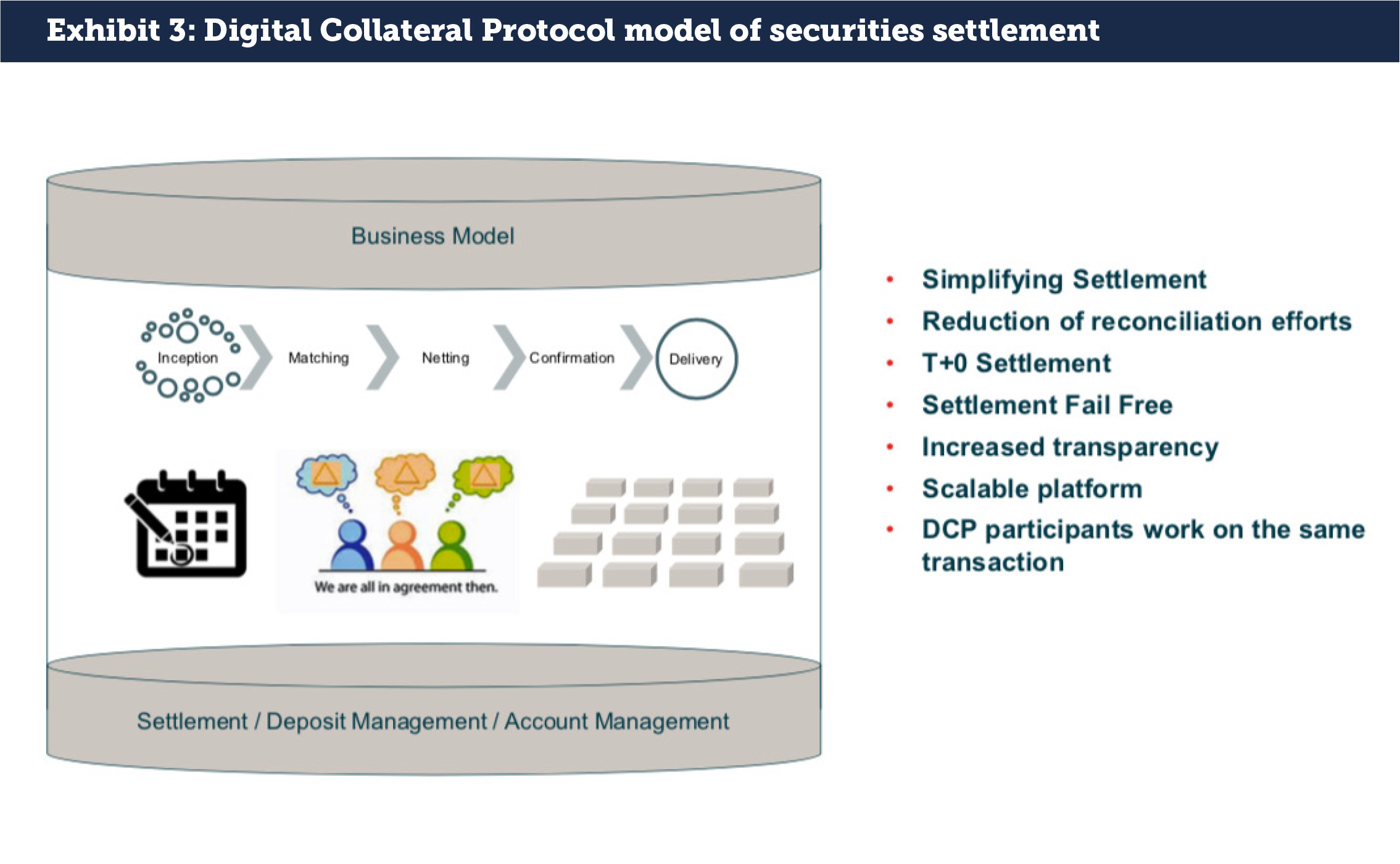 The cost of using the DCP will be a fraction of today’s settlement costs, thus allowing a much greater share of smaller and diversified collateral positions to become tradable in securities finance markets. Depository banks could still charge a fee to their end-clients for operational services, but this fee should be lower than what clients pay now and what gets paid to subcustodians. Depository banks could wind up making more money from the DCP platform than they do today, as lower fees plus much lower costs should result in a higher markup.

The losers would be subcustodians whose only purpose is to intermediate. They could see a loss of their business almost entirely due to greater efficiency. Some custodians in some countries, for example Europe, have already seen declines due to Target2 Securities. The DCP model would hasten their transition to other business activities. Losers could also be all kinds of intermediaries that currently benefit from the fragmented post-trade world.

Banks and asset managers would see the biggest success from the DCP model because of improvements to settlement efficiency and netting. Faster settlement means less financial exposure to counterparties, which means lower balance sheet costs. This has become an important factor in trading costs and has created a cottage industry for calculating settlement and collateral exposure. Reducing settlement lag times would substantially ease operational burdens for market participants and reduce the amount of balance sheet liabilities set aside for settlement and liquidity management (i.e. liquidity buffers) purposes.

It is also possible that the DCP could meet the important rules of netting that would allow banks to take advantage of multiple products traded on different CCPs and exchanges, but settled on one platform. Netting rules require that:

Active management of the netting process on DCP could result in exceptional balance sheet benefits. For example, if BNY Mellon were to sign up as the clearing agent for FICC GCF Repo® transactions, then repo cleared on FICC could potentially be netted against repo cleared at LCH or Eurex. All trades would be executed under a Master Agreement that allows netting; the settlement layer of DCP would be the same; the counterparty of DCP would be the same; and maturity decisions would be between the two counterparties. If successful, this could mark an important cost change in how banks approach netting.

DCP is unlike anything we have seen before in financial markets. It is not a new cash system like Fnality, nor is it a collateral trading platform on the blockchain like HQLAx. Rather, it solves a specific problem in the existing settlements framework by standardizing one operational layer in the chain of depository banks.

A broad adoption of the DCP would offer a range of secondary benefits and opportunities as well. It is well understood that holding cash on a digital ledger can lead to trading smart contracts on the blockchain; this business model has been explored by over a dozen technology vendors leveraging ISDA’s Common Domain Model. But these firms lack the infrastructure that each product needs to execute their instructions, and have thus far been forced to ask potential clients to sign up to customized blockchain instances. DCP would be the backbone for these protocols that can be adopted by any participant in financial markets with a depository bank that holds their assets. A move by the DCP blockchain layer to integrate directly into Target2 Securities (T2S) would further enable instantaneous settlement between custodians.

While there are further ideas that could be executed with a global blockchain for settlements that sits between major custodians, the first and most important is facilitating faster and more efficient settlement between international trading counterparties. If we are successful in accomplishing this first objective, then DCP could ultimately become a broader framework for a range of new product introductions. First though, the business model of the DCP must be presented to major custodians with a vision of global buy-in for this common settlement layer.

Michael Cyrus is Head of Collateral Trading and FX at DekaBank, including Fixed Income Repo, Securities Lending, Equity Finance, Structured Collateralised Solutions and FX. He joined DekaBank from RBS London, where he was global Co-Head of Short Term Markets and Financing responsible for Repo, Collateralised Funding, FX and Interest Rate Prime and ETD. Before RBS, Michael was Head of Credit Financing and Collateral Trading (CFCT) at Dresdner Bank in London focusing on Emerging Market Repo, Equity Finance, Tri-Party Repo and synthetic financing in fixed income and credit markets. He started his career at Dresdner Bank in Frankfurt. Michael has a wealth of experience in the short-term money, repo and securities lending and financing markets as well as in Treasury operations. He holds a degree in economics from the University of Hamburg.

De-mystifying blockchain in financial services: feedback and questions from the Finadium client webinar (Premium)
14 Dec 2015
No Comments
Should bond holders care if financing trades are made as securities loans or repo?
31 Aug 2021
No Comments
Future-Proofing the U.S. Treasury Market
29 Nov 2021
No Comments