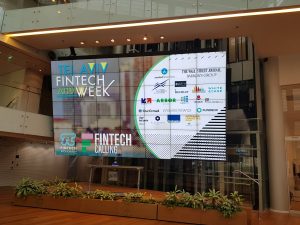 There was a lot going on during Fintech Week, which took place in the first week of March in Tel Aviv and Jerusalem and drew attendees from all corners of the world. We’ve teased out a few interesting themes that emerged from across sessions and events.

Fintech (r)evolution? There’s certainly been a shift from fintechs wanting to disrupt the big banks, to a more cooperative model. Banks are increasingly “dipping their toes into collaboration” but some participants noted that this is also a “branding” thing that paints a “nice innovation layer”. Still, banks are the biggest spenders on fintech, and the deals are getting bigger and more frequent.

At the same time, it was noted that there is still a fintech movement that seeks to combine services in such a way as to cut banks out of the loop entirely. That seems like a long road, but perhaps does present a hedge against collapsing banks in any future financial crisis. But with the pressure to commercialize, the trend seems to be for fintech firms to white label their innovations.

Lithuania is positioning itself as a major player for regulatory supervision of fintechs. The jurisdiction has licensed 47 electronic money institutions (EMIs), 33 payment institutions, and three specialized banking institutions. One of the noteworthy licensees is Revolut, a unicorn valued at $1.7 billion with excellent fintech pedigree, having graduated from London’s Level 39. The spotlight, however, has brought out some questionable selling practices.

Sigitas Mitkus, the director of financial markets policy department at the Ministry of Finance in Lithuania, denied the Baltic country is some kind of “back door” for approving banks in a way that could inject systemic risk. If anything, as an EU member, it’s the front door, he said. If someone has something to say about Revolut’s business practices, then the regulator is open to hearing about it, he added.

He described Lithuania’s fintech environment as a growing ecosystem, with: Google Payment obtaining an EMI license; a regulatory sandbox launched by the central bank; presence of companies from around the world — Singapore, Australia, and Israel, for examples; a Barclays Accelerator in capital city Vilnius; among other initiatives. Moreover, the fintech policy strategy has ended up paying dividends in other government policy areas, such as migration, Mitkus told Fintech Capital Markets.

Blockchain is often discussed like it’s the internet: blockchain was referred to as the “the internet of value”, and comparisons made between BTC/LN (bitcoin/lightning network) and TCP/IP (the protocol of the internet). Perhaps some of this mentality comes from the undeniable similarities between the hype around products and services on the blockchain, and the early days of internet and the dot.com boom/bust. More than a few panelists also compared the ICO craze to “an exit scam”, but doesn’t seem to have stopped the guesswork over which firm may emerge as Amazon.

Data power to the people: It was one of the major trends identified by VC firm (and fintech) OurCrowd. And across the week, plenty was said to back up the notion that data ownership will evolve into a market. One speaker from an investment fund said that he does not begrudge companies making money of his data, “I just want a cut”. Using the term “data gravity”, one Hong Kong VC remarked on a near future in which large ecosystems of data, services, applications, are set to monetize the user base beyond “core competencies”. How banks are going to monetize their APIs and sell their databases is yet to be seen, but predicted to be a major change in mindset and break from tradition.

Banks are interested in Quantum Key Distribution (QKD): If you want to know what QKD is in detail, there’s a great explainer here. Briefly, it’s a technology that promises secure communication channels, and which is now available commercially over short distances. Yanir Farber, CEO of QuantLR, a startup developing the technology, told Fintech Capital Markets that banks indicating interest have been BNP Paribas, BBVA and Hapoalim. At the same time, he sees the target market as 5G network providers, in which embedding QKD is an efficient strategy for secure communications by design.

Facebook’s cryptocoin rumours came up, a lot: While many references were specific to the social media giant, which refers to itself as a technology company, conversations around Facebook Coin are generally about what the future might look like when these kinds of firms integrate with payments. In a recent report from Barclays, analysts wrote that “if Facebook Coin proves successful in reinvigorating FB’s micropayment strategy for digital content distribution, we see as much as $19 (billion) in additional revenue in our ‘upside case’ by 2021”. Nobody is quite sure what it’s going to look like, but there’s consensus that Facebook at least is far from being compliant to move forward significantly. J.P. Morgan’s internal settlement coin was also mentioned its fair share. Viewed as a boost to the integrity of institutional crypto, a few panelists cautioned against comparing it to a cryptocurrency since the usage is different. Lots of wait-and-see around this topic.