We now discuss FBOs’ intermediation activities in the money markets as a function of reserves supply and the FBOs’ balance sheet constraints. When the supply of reserves is ample or abundant, the EFFR trades below the IOR. This happens because many cash-rich lenders, such as the Federal Home Loan Banks, do not have access to the IOR and are willing to lend at a rate below the IOR. The existence of the cheap supply of cash gives rise to an arbitrage opportunity for banks, known as IOR arbitrage. Banks simply borrow from the cash-rich lenders at a lower rate and park the money at the Federal Reserve, earning a higher rate. While IOR arbitrage is a textbook risk-free arbitrage, banks may not have enough balance sheet space to scale up this arbitrage to eliminate the gap between private money market rates and the IOR.

FBOs have comparative advantages in engaging in IOR arbitrage due to differences in regulations. First, the leverage ratio requirement for U.S. banks in the form of the supplementary leverage ratio is tighter than the standard Basel III requirement. Second, U.S. banks pay additional FDIC insurance fees on their total assets, which erodes the profits of IOR arbitrage. FBOs are not FDIC insured, and therefore do not pay the fee. According to estimates from this paper, shown in the next chart, foreign banks indeed account for the bulk of IOR arbitrage activities. Therefore, the IOR-EFFR spread during the ample reserves regime effectively reflects the shadow cost on the FBOs’ balance sheets associated with IOR arbitrage. 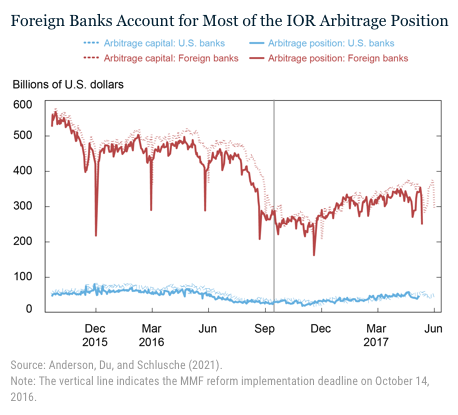 The full article is available at https://libertystreeteconomics.newyorkfed.org/2023/01/foreign-banking-organizations-in-the-united-states-and-the-price-of-dollar-liquidity/

Where is all that corporate cash going? Why, to repo of course.
9 Jan 2012
No Comments
“The Ballad of the Repo Trader” by Bloomberg’s Tracy Alloway
3 Dec 2015
1 Comment
Fed accelerates plan to reduce balance sheet size
4 May 2022
No Comments