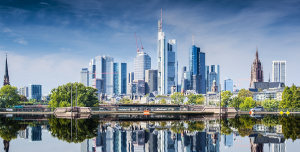 Progress on Frankfurt as the next big banking hub

Arguments are growing in favor of Frankfurt as a larger financial hub post-Brexit. A regional lobbyist is saying that 750 to 800 billion Euros in assets will transfer from London to Frankfurt as a result of Brexit. Here’s where we stand.

According to Hubertus Väth, Managing Director of Frankfurt Main Finance, a regional advocacy group, “We know that 37 financial institutions, banks and securities trading banks have applied to the ECB for new licences or extended existing ones and have already received them or are likely to receive them shortly…. 30 of these institutions have chosen the Financial Centre Frankfurt for their European headquarters.”

In a May 2018 report, “Is Frankfurt the Next Collateral and Liquidity Hub?“, Finadium found that a disproportionate number of large money center banks were choosing Frankfurt as a Continental European headquarters: 13 large bank and infrastructure providers had selected Frankfurt compared to six for Paris, the next largest concentration. We expect that the activities of each firm will cluster around specific geographies; after London, Frankfurt appears to be where collateral and liquidity trading would occur.

Banks can talk about transferring jobs – people – but in a disruptive technology age, the number of heads transferred does not matter as much as the roles and functions that are moving. One person running five computers may require much more capital and generate much more revenue than 10 people on two computers. It is important to look at not just the headcount but also the critical nature of the business activities being transferred. As Väth points out, the move of 750 to 800 billion Euros is probably the right statistic to measure the move of business activity.

In May 2018, we also analyzed the labour laws that make Germany unattractive for banks. Labor laws and taxation are a central lever of competition between European capitals in attracting financial services firms from London, and both of these topics are highly politicized. General business practices have both historically protected European workers and made companies reluctant to invest heavily in permanent hires. Frankfurt and Germany have their share of obstacles to work through, some of which could have broad-based impacts on German society and will not be changed lightly.

In response, Frankfurt Main Finance notes that “A significant factor in financial institutions’ decision to relocate business to the Financial Centre Frankfurt was the willingness signalled by German politicians to reconsider the issue of labour protection for risk carriers. Following its inclusion in the coalition agreements, the draft law, which is tailored specifically to risk carriers, is being consulted in the ministries. ‘Politicians have listened, promised and delivered,’ says Väth. ‘This is a clear sign that the banks’ relocation to Germany is desired. It is a sign that is seen and appreciated.'” We wouldn’t call this a done deal but the conversation appears to be moving forward.

We at Finadium believe that Frankfurt has a strong argument to become a Continental European center of finance, in particular collateral and liquidity trading. In support of this, we are launching a new conference, “The Business of Collateral Trading,” on February 21 2019 in association with Frankfurt Main Finance and sponsorship from DekaBank, CACEIS, IHS Markit, Comyno and Eurex. We look forward to hearing directly from Hubertus Väth where he sees the evolution of Frankfurt as a financial hub. Our conference is open to the public – we hope to see you there.

Can securities lending now talk about “Best Execution” for real? (Premium)
21 Jul 2020
No Comments
More on market liquidity: is there another side to the Fed’s argument?
14 Oct 2015
1 Comment
Great FT article on seclending but Finadium data were misquoted the first time around
11 Jan 2016
No Comments