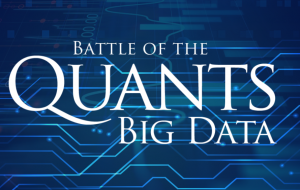 Sneak peek: Battle of the Quants in London – December 10

This year’s Battle of the Quants London continues its focus on data, bringing together speakers and panels looking at the advanced technologies required to turn data into alpha and how the buy-side is working with the emerging digital asset class and ESG.

And perhaps in a sign of the times for market infrastructures, DTCC has come on this year as a sponsor, indicating the ever-increasing attraction between those who have the data and those who need it. We take a sneak peek at what’s on the agenda, and consider what the sell-side and vendors need to know about trends at a time when more non-traditional players are coming to the securities finance markets.

When it comes to the major global and market themes of big data, models and tech, “it’s the tail wagging the dog,” said Bartt Kellermann, founder and host of Battle of the Quants. In other words, data is determining strategy.

“Before, it was the other way around, you create a strategy, and then you would find the data to run that strategy. Now it’s reversed, and it’s all about the data,” he said, adding that this reversal is somewhat tempered by that fact that good data can be hard to find. Even so, it’s getting easier as both financial institutions and external providers fill in the gap with “databases of all the data”.

It’s fitting that the keynote speech will be delivered by Gregory Zuckerman, special writer at the Wall Street Journal and author, most recently of the Jim Simons biography, The man who solved the market, in a reflection how we got to this point. Simons was a middle-aged mathematician working in a Long Island strip mall in 1978, who went on to found the notoriously secretive and profitable hedge fund Renaissance Technologies and, along with it, the data-driven, technology-enabled quant revolution.

Kicking off the lead panel will be a discussion of unpredictable markets in an era of tanking IPOs, Twitter, central bank actions, Brexit, and trade wars, as just a few examples, with speakers “Michi” Botlo from QuantBot, Theo Tsagaris from BayForest, Bastian Bolestra from Deep Field Capital and Abhijeet Gaikwad from Trium.

“There is so much volatility and unpredictability, how do quants develop algos or models that work in an irrational, impossible to decipher market?” said Kellermann. “Either you go short term with massive amounts of data and machine learning…and then on the other side you have long, esoteric value trades.” And while money can be made on both sides of the spectrum, “the middle is getting eviscerated”, he added.

Also on the agenda is a fireside chat between CME Group’s market tech and data services head Stewart Jardine and Alex Stepney, a Google engineer, to discuss real-time data uploading, manipulation and transfer on a global basis, as the world’s largest exchange and data company team up on services.

Other panels looking at data-based alpha look at the build and buy debate, as well as how to get signals from noise. For the vendor and sell-side communities, the trends point to more revenue on the back of processing and monetizing data, noted Kellermann.

“You need more storage space, more analytics, and more transfers of data and indexing,” he said. “There are new entrants coming into the data world on a daily basis because people are finding now that all the data that they kept inside the company is worth something, so they will hire somebody to come in and package and index data and make it available to other buyers.”

This is also where an advanced technology like quantum computing comes in, which is the focus of one of the panels and “dovetails perfectly” into a world of financial algorithms, machine learning and real-time trading based on millions of data inputs, said Kellermann.

While portfolio optimization using quantum annealers gets a lot of focus for financial applications, the other development is quantum computing’s potential to plough through an exponential increase in unstructured data, which is overwhelming some mainframe computers.

Fund managers, said Kellermann, want to “keep their ears to the rail to hear what’s coming down the track” and can be expected to jump in when the tech makes financial sense, so when it’s able to improve the ability to harness and analyze data better than conventional computers. It’s one of the reasons that the Google-IBM quantum supremacy debate has captured imaginations.

Other trends highlighted by the conference have to do with new traded products, namely, digital assets and Environmental, Social and Governance (ESG) factors.

On digital assets, speakers from funds, custody, venues will discuss the kinds of quantitative models being used, similarities and differences to traditional markets, as well as some speculation on whether crypto-traded markets will grow or disappear.

ESG meanwhile is currently more relevant in Europe but certainly making its way across the pond. Speakers from both buy- and sell-sides will talk about where to find alpha on a panel aptly titled Will the Most Predictive ESG Data Set ‘Please Stand Up’? “What a lot of findings are showing is if you invest in a company that lives within the guidelines of ESG, there’s definitely alpha there,” said Kellermann.

One of the overarching themes is that the data world is getting bigger in an exponential fashion, existing datasets are getting more sophisticated, and more datasets are coming into the market, which is going to impact a lot more market actors than just quants.

“Custodians, the supporting fund admin side, when they look at this, they are going to be the ones packaging the data because that’s where the data is stored… Just think about all the opportunity that’s out there in terms of new datasets, and the analytics that has to be produced.”

Battle of the Quants takes place on December 10 in London. Finadium SFM looks forward to seeing you there.