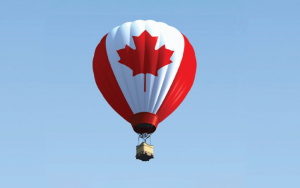 The value of the repo CCP in Canada

While the concept of central counterparty (CCP) repo clearing may seem simple, the efficiency and effectiveness of such a process rely on a complex set of interlocking pieces, including sound risk management practices and robust technology and operations. The Canadian Derivatives Clearing Corporation (CDCC), which offers a CCP repo clearing (Repo CCP) to Canadian banks, brokers and certain buy-side participants, has successfully created the tools to help clients succeed in the domestic repo market. A guest contribution from the Canadian Derivatives Clearing Corporation.

Since 1970, CDCC and the Canadian Depository for Securities (CDS), the post-trade CCP and CSD engines of TMX Group, have continuously evolved and adapted their offerings to position Canada among the premier marketplaces in the world, consistently meeting international and national standards in securities market infrastructure. CDCC is the only integrated central clearing counterparty in North America that clears and settles futures, options and options on futures, as well as fixed income repo transactions. CDS custodies securities worth over CAD$5 trillion and processes 2 million exchange trades per day.

The systems of both CDCC and CDS have been designated by the Bank of Canada as systemically important and, as such, operate in accordance with rigorous standards for financial infrastructures worldwide as set out by the Principles for Financial Market Infrastructures (PFMI) issued by the Committee on Payments and Market Infrastructures (CPMI) and the International Organization of Securities Commissions (IOSCO). CDCC and CDS are recognized as qualifying central counterparties (QCCPs) by global regulators.

In an age of heightened competition among international service providers, a domestic solution built for and by Canadian market participants is more relevant than ever. It is the best way to ensure that the specific requirements of Canada’s banks and buy-side firms are met both here at home and within the ever-expanding global marketplace. It is also the best path towards maintaining strategic independence and the ability to evolve national regulations and practices to best address the needs of domestic market participants.

Since 2012, CDCC has offered central clearing services for repo transactions to Canadian market participants. This model recognizes that both banks and buy-side firms are central to the Canadian repo market, and integrates the needs of both sides of the trade on one platform. The service has been successful, and expanding buy-side access and enhancing netting opportunities for bank members are key priorities.

Repo is a key part of how banks finance their business and their clients. Across repo, OTC derivatives and securities lending, the Canadian collateralized trading market was CAD$446 billion in 2018, according to CDS analysis (see Exhibit 1). There were roughly CAD$275 billion in bilateral or CCP repo transactions, representing 62% of the market, and another CAD$100 billion in securities loans at 22%. The repo market is growing in response to greater demand for secured funding, as well as tax changes and non-cleared margin rules that make OTC derivatives less attractive. The Canadian repo market is the fifth largest globally, according to a 2017 report by the Committee on the Global Financial System.

Yearly nominal volumes cleared at CDCC have increased by approximately 8% in 2018 compared with 2017, to CAD$4.6 trillion (see Exhibit 2). Average daily volume for cleared repo at CDCC was CAD$17.2 billion in February 2019, an increase of roughly 4% from 2017. Average daily volume for cash fixed income is approximately CAD$8.9 billion. Approximately 97% of the 2018 repo volume at CDCC is cleared by bank clearing members while buy-side clearing members represent 3% of volumes. 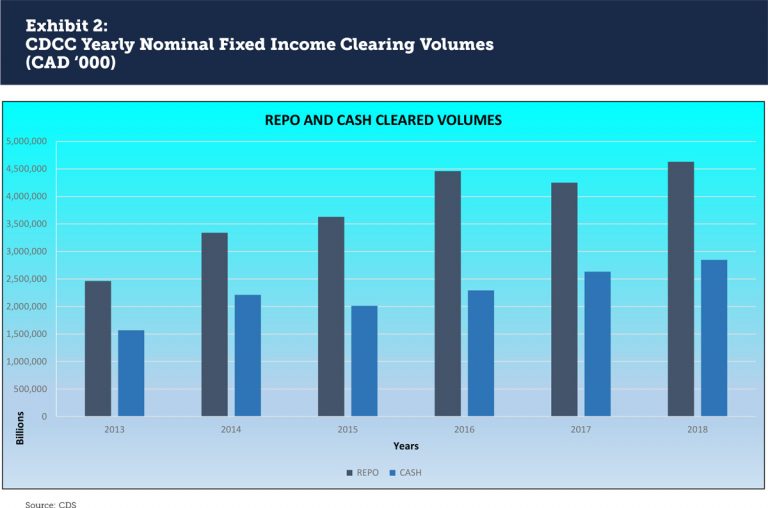 A 2018 report by Deloitte Canada, commissioned by the Investment Industry Association of Canada (IIAC), found that the Canadian market is unique owing to the large participation of the buy-side. In most countries, banks are net borrowers of securities to fund their business, but in Canada they are net lenders. Conversely, most buy-side firms outside Canada lend cash to banks for repo financing, but in Canada they are net borrowers. Banks still hold the largest gross share of repo exposure although the importance of the buy-side is widely recognized.

Building out the repo CCP

CDCC’s Repo CCP is widely recognized as a Canadian success story. According to Ian Russell, president and CEO of IIAC, “This solution, led by the street, is the first of its kind globally to integrate direct participation from the buy and sell side and deserves acknowledgment. It is a win not only for debt markets, but for the broader financial system and growth of the Canadian economy.” CDCC’s Repo CCP clears roughly 17% of the Canadian repo market and is an important backstop lender in case of a future credit constriction event in the bilateral markets.

The Repo CCP accepts the buy-side as Limited Clearing Members (LCM), an innovation pioneered in Canada and later adopted by other CCPs around the world, and went live with its first members in 2018. This has been a welcome development. One objective of direct buy-side participation is netting, which is also a principal consideration for banks. While some buy-side firms have been able to adopt the LCM model, the complex chain of market participants required to make this a reality can be a challenge for other firms. CDCC is exploring other access models for engaging these buy-side firms on the CCP, and for banks to be able to capture netting benefits on our platform.

In a related area, CDCC is working to develop an active term repo market through diversification of our clearing member composition. A term market will provide greater netting flexibility for all members, resulting in a more robust CCP platform.

Market participants have shown interest in CDCC launching a new GC Repo product, where a cash provider would invest in a basket of securities that meets a specific standard, for example General Collateral, or compliance with the Liquidity Coverage Ratio. It is expected that a GC Repo product would lift volumes on the Repo CCP by at least 25%. A GC repo contract cleared by CDCC will add fluidity and depth to the Canadian repo market.

CDCC is committed to the Repo CCP: it is a core offering serving the needs of Canadian market participants in close cooperation with our members. Our buy-side membership option and ongoing investigations into what other models are possible serve to illustrate the high value we place on the role of Canadian buy-side firms on our platform. They are a key contributing factor to making CDCC’s Repo CCP what the IIAC termed a “Made-in-Canada, Street-Led Liquidity Success Story.”

Repo CCP must be managed with a thoughtful and progressive approach in order to thrive, and repo remains just one part of the multi-faceted funding and collateral system. The ongoing implementation of domestic and global regulatory initiatives continue to be a big driver of the evolution of repo and collateral markets. In order to be able to most efficiently manage collateral across repo, securities lending and OTC derivatives, Canada needs a domestic champion, TMX, to maintain a single architecture. This will allow the Canadian market to take greater advantage of its own version of collateral management, leading with the Repo CCP, and enhance bank and buy-side capabilities going forward.

Canadian Derivatives Clearing Corporation (CDCC) acts as the central clearing counterparty for exchange-traded derivative products in Canada and for a growing range of customized financial instruments. CDCC’s role is to ensure the integrity and stability of the markets that it supports.

A framework for build, buy or network in a changing market environment
14 Sep 2017
No Comments
US securities based lending: Reg T and Reg U intent versus reality
6 Jan 2016
No Comments
What we learned on TRS from the FT Comments section
8 Apr 2021
No Comments