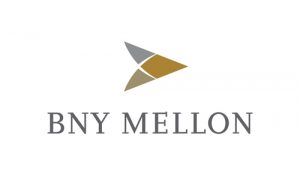 US government debt has risen to the apex of global collateral and securities finance over the past decade. New data from BNY Mellon reveal just how central Treasuries are in global financial markets. A guest post from BNY Mellon.

In today’s intricately connected global capital markets, US Treasuries occupy an almost unassailable position. Their reputation as the ultimate risk-free asset has been solidified by the episodic volatility that has roiled markets in the years since the 2008 collapse and by the post-crisis rules that gave them new prominence as a safe haven for investors.

Treasuries have also benefitted from the wider adoption of non-cash collateral since the crisis. Just over $1.8 trillion in cash was posted as collateral against loans and other transactions in 2008, with $1.3 trillion coming in the form of securities and other instruments, according to data provider IHS Markit. A decade later, those positions have inverted, with non-cash collateral balances standing at $1.6 trillion, compared with $870 billion for cash. 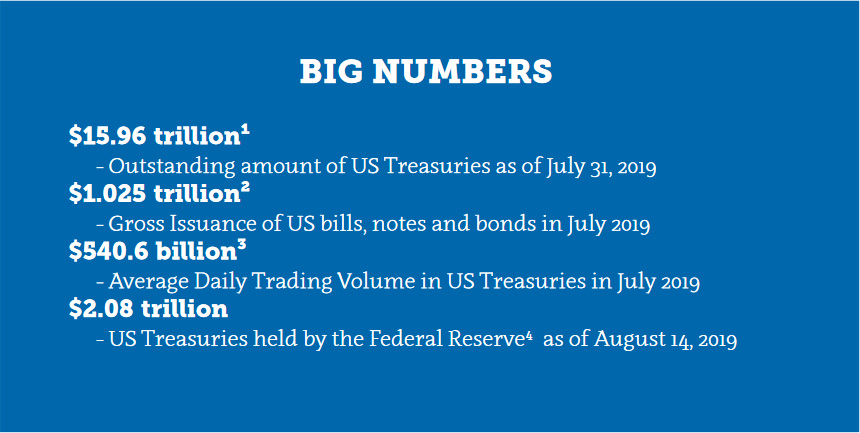 The turning point coincided with the implementation of significant elements of a new regulatory framework known as Basel III. Two of the most substantial capital requirements included in the Basel reforms, the Supplementary Leverage Ratio (SLR) and the Liquidity Coverage Ratio (LCR), required banks to hold additional capital against the cash they set aside for trading and risk-taking. These requirements began to take effect in 2015, the same year the use of non-cash collateral started to accelerate.

Consequently, US Treasuries are increasingly being used to meet regulatory requirements and for a variety of financing needs. These include short-term repurchase agreements or “repos” and securities loans where Treasuries are used as collateral. Data from BNY Mellon’s triparty platform, where the bank acts as an intermediary and collateral manager for client activity, bear out this trend.

At the start of the observation period in 2014, just over 35% of balances in the bank’s US triparty platform were represented by US Treasuries. By 2017, that percentage had grown to almost 50%, indicating more Treasuries are being allocated to financing and regulatory activities.

To shed further light on these issues, BNY Mellon’s Clearance & Collateral Management and Securities Finance businesses analyzed their own proprietary data concerning US Treasury collateral and lending balances across the bank’s triparty platform between January 2014 and July 2019.5

The analysis paints a picture of a market transformed by new rules that have further reduced the use of cash as collateral, driven those cash exposures off dealer balance sheets, and propelled US government securities to the forefront of the global financing landscape.

The growth has been slow but steady. Treasury balances did not jump markedly in the year preceding the implementation of the SLR and the LCR, nor indeed for most of the subsequent year. Total balances in BNY Mellon’s US triparty platform grew just 11% between January 2014 and August 2015 (see Chart 1).

Activity began to pick up thereafter, however, with Treasury balances expanding 35% between September 2015 and June 2016. For the next two years, balances oscillated within a relatively narrow range of 34% and 60% above the January 2014 baseline. 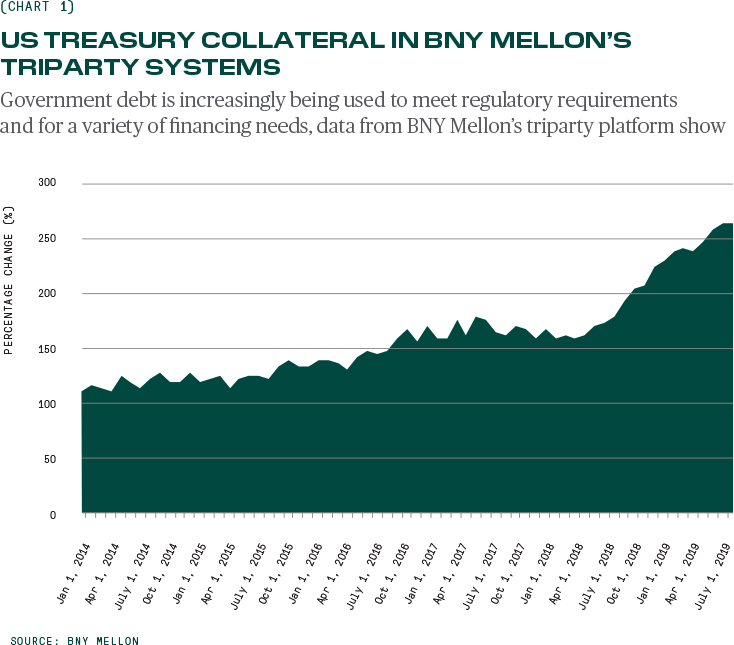 This data may seem surprising. Elements of Basel III such as the SLR and LCR were taking effect in the US at the start of 2015, but it was not until the end of that year and into 2016 that the data show a sustained elevation in Treasury balances. Experts explain, however, that there was likely a time lag between new regulatory requirements coming into effect and those changes starting to influence client behavior.

“We were seeing dealers starting to make their business models more efficient around this time; they were rationalizing clients, optimizing their balance sheet and that resulted in a much higher use of securities as collateral,” says James Slater, Global Head of Business Solutions for Asset Servicing at BNY Mellon.

A big driver for this rise was the implementation of rules that effectively penalized banks for funding themselves with short-term unsecured deposits while investing in longer-term assets.

The rationale was simple: if banks are relying on huge volumes of cash deposits (which can be withdrawn by clients at a moment’s notice) to meet their SLR and LCR requirements, that cash doesn’t truly constitute a source of funding that banks can rely upon during a crisis.

Instead, to meet the capital and funding levels demanded under these new liquidity ratios, banks were required to access high-quality liquid assets—or “HQLA”—to cushion them. With hundreds of billions in additional HQLA needing to be sourced by banks to meet the new regulations, Treasuries proved to be the natural beneficiary of this demand.

“We saw a pronounced leap in US Treasury balances as many of these regulatory forces began to coalesce,” adds Slater. “In 2016, we saw banks move away from funding in the unsecured markets and the consequent growth of triparty as repo desks recast their business funding models.”

The most abrupt surge in Treasury collateral balances within the dataset followed the emergence of BNY Mellon as the leading Fed clearing bank in the business of settling US Treasuries in mid-2016.

It was only in 2018, however, fol­lowing the onboarding of many smaller counterparties the year before, that the primary dealers—those financial entities who buy US Treasuries directly from the Fed6—began to migrate to BNY Mellon, setting the stage for collateral balances in the bank’s triparty platform to surge yet again.

“The growth in volumes makes sense because when a bank or broker-dealer moves their clearance of Treasuries to BNY Mellon, the use of triparty allows them to more efficiently link the settlement of their government securities to the use of those assets as collateral in financing,” explains Brian Ruane, CEO of Clearance & Collateral Management at BNY Mellon.

Lending volumes in US Treasuries were generally stable from 2014 through late 2016, followed by a pronounced surge as regulatory forces ramped up appetite for HQLA borrowing.

The lending of Treasuries soared 128% between June 2016 and February 2018 as banks sought to access HQLA to meet their LCR targets through the securities finance markets markets (see chart 2). This type of transaction became known as the “collateral upgrade” trade, in which a borrower typically pledges another form of security to access Treasuries rather than posting cash, which would generate a capital charge. 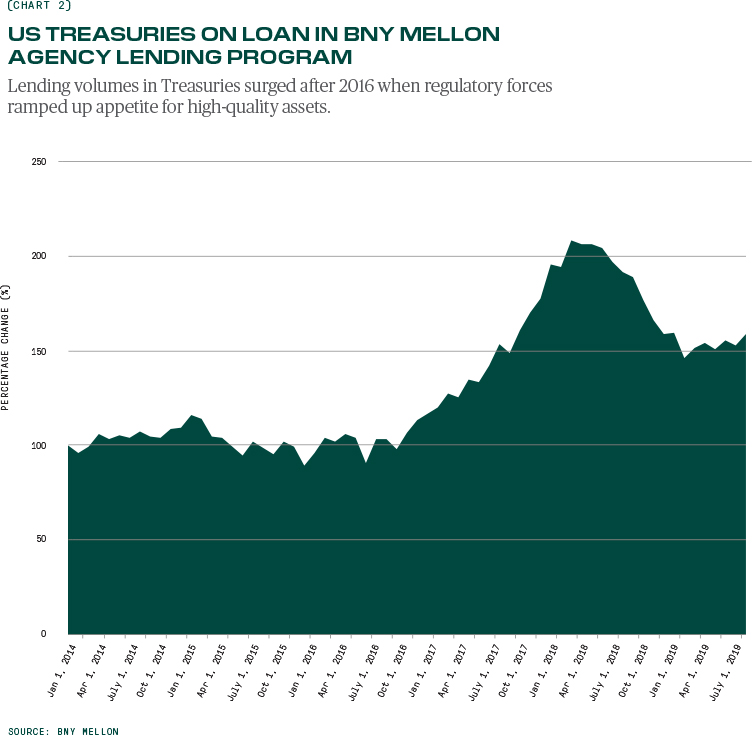 “What we saw during this period was dealers trying to optimize their balance sheets,” says Ruane. “One way that they did this was by posting equities as collateral and borrowing US Treasuries, upgrading one form of col­lateral for higher quality securities that could be used to meet their funding requirements.”

After the huge surge in Treasury lending into early 2018, demand for the upgrade trade stabilized into the second quarter of that year before it began to wane as the volume of US government securities available in the market began to increase. Loan balances nonetheless were 58% higher on July 31, 2019 than they were at the start of the observation period.

Issuance and the Fed

What’s next for the utilization of Treasuries in collateral management and securities finance will likely be influenced by policy decisions undertaken by the Federal Reserve and the US Treasury Department.

An unwinding of the Federal Reserve’s asset purchase program, under which the US central bank bought US Treasuries in order to inject liquidity into anemic markets in the aftermath of the financial crisis, has flooded the debt markets with supply. In the past two years the US central bank has been steadily reducing its holdings by allowing US Treasuries and agency mortgage-backed securities to mature and roll off, without repurchasing them. In August, the Fed started reinvesting in certain Treasuries.

Nevertheless, for Treasuries specifically, holdings have already declined from $2.46 trillion in October 2017 to $2.08 trillion by August 14, 2019, Fed data show.8 That residual $380 billion in US Treasury supply has been absorbed by private buyers, and likely played some part in the evaporation of the upgrade trade in the past 18 months.

Just as the Fed started to step back from the Treasury market in late 2017, the US Treasury Department was ramping up new issuance to help bridge the federal spending gap, in part created by the sweeping reductions in corporate and individual tax rates under the Tax Cuts and Jobs Act of 2017.

“If an institution wishes to use [Treasury] assets for financing, to gain yield through lending them out or to meet their HQLA requirements, putting the securities into triparty is the most efficient way to achieve those goals”

The Congressional Budget Office forecasts US annual federal deficits of $1.2 trillion a year between 2019 and 2028.9 That will add an additional $12.4 trillion to the existing US national debt, which stood at $22.5 trillion in August 2019.10

Some $1.025 trillion in new Treasuries were issued in July 2019, compared with $889 billion in July the prior year, according to data from the Securities Industry and Financial Markets Association.

Amid the increasing issuance from the Treasury Department, the balance sheets of the US primary dealers have rapidly become stocked with the paper. According to data from the Federal Reserve Bank of New York, on August 8, 2018, primary dealers held $133 billion in Treasuries, a number that had swelled to $201.5 billion by August 7, 2019, a 51% increase in just 12 months.11

While primary dealers load up, there are signs that the appetite of foreign investors may be waning. Analysis by the Federal Reserve Bank of St Louis shows that federal debt held by international investors expanded from just over $1 trillion in the first quarter of 2001 to exceed $6 trillion by the second quarter of 2014. In the five years since, however, foreign holdings have largely stagnated and sat at $6.4 trillion at the end of Q1 2019.12

Analysis of the holdings of the largest national overseas investor in Treasuries reveals China to have lost some of its enthusiasm for the securities. The country saw a $79 billion reduction in its enormous $1.1 trillion Treasury portfolio between March 2018 and March 2019. That said, the next three largest investors—Japan, the UK and Brazil—all increased their Treasury holdings over the same period.13

A Victim of Its Own Success?

All in all, the picture that emerges of the US Treasury market in mid-2019 is one of an asset that has never been so central to global investors—a centrality thrown into even sharper relief in a globalized economy that’s becoming increasingly skittish about a simultaneous slowdown in global growth.

There are also concerns that an inverted US yield curve may be a harbinger for an impending recession in the world’s largest economy.

Unquestionably, the past decade has seen Treasuries recognized—in practice, if not by proclamation—as the markets’ mainstay portfolio holding. Crucially, however, BNY Mellon data may indicate a new phase of the cycle. While the decline in Treasury lending activity since mid-2018 is hard to attribute to a single factor, it coincides with one of the most frenetic periods of fresh debt issuance from the US government in history.

Even if investors are turning to buy Treasuries outright rather than borrowing them, a few other data points will require monitoring going forward.

The primary dealers are now holding more Treasury inventory than ever before. At the same time China–the one-time most enthusiastic purchaser of US government debt–is reducing its holdings.

If the Treasury Department plans to increase the US debt load by more than 50% by 2028, amid reports it is considering selling 50-year and 100-year bonds, questions will inevitably be raised about which buyers have the capacity to absorb all the new issuance.

The burning question for the US Treasury market in 2020 and beyond may very well be: who’s buying the paper?

Peter Madigan is Editor-at-Large for BNY Mellon Markets, responsible for crafting content across the FX, capital markets, securities financing and collateral management businesses. Prior to joining BNY Mellon, Peter spent 10 years with Risk.net’s New York bureau in a variety of roles. Peter started his career in London, where he worked as a staff writer for a number of financial trade publications.