What happened with robo-advisors in Q4 2018

The fourth quarter was a tumultuous quarter, giving robo-advisors plenty of opportunities to harvest tax losses. And with the S&P 500 falling 13.52% in the quarter, robos were making more trades than ever have before, according to data from Backend Benchmarking’s Q4 2018 robo report.

One portfolio’s activity was of particular interest. TD Ameritrade’s SRI portfolio harvested tax losses three times in the fourth quarter, and to avoid running afoul of the wash sale rule, their third sale was not replaced with a similar fund, leaving 35% of the portfolio allocated to cash.

This trade was done on December 24th. During the period between December 24th and the end of the year, the S&P returned more than 6%, therefore holding cash created significant drag on the portfolio.

This portfolio aside, Q4 2018 saw continued strong returns from Fidelity Go, which is emerging as a performance leader. 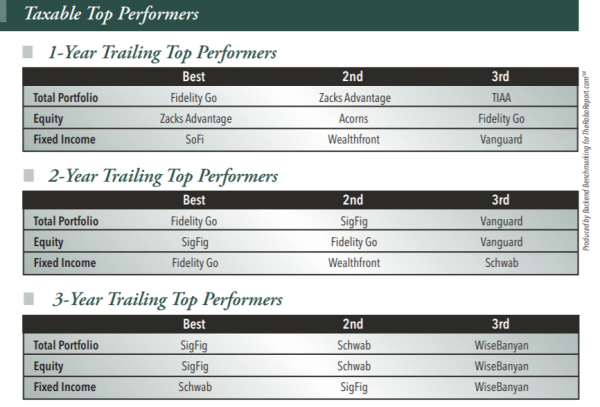 In regulation, the Securities and Exchange Commission announced in December that it reached a settlement agreement with two robo advice providers. It is the first regulatory action against providers. The SEC order stated that Wealthfront claimed to be monitoring outside accounts for wash sales related to their tax-loss harvesting product when, in fact, they were not.

The SEC also reached an agreement with Hedgeable over the self-published performance of their direct-to-consumer robo advice product, which was discontinued in 2018. While the SEC took their first actions against robo advice providers, they also removed robo advisors from the published exam priorities in 2019.

Industry adoption in Q4 2018 showed that as interest and adoption grows among banks and advisors, so does activity in B2B robo advice products. BlackRock, owner of FutureAdvisor, bought a minority stake in Envestnet, a major provider of technology to advisors. This transaction opens doors to increase exposure in the advisor community to FutureAdvisor’s technology.

Also, Betterment launched a cash management product that invests in a low-cost, low-risk, fixed income portfolio. This product is being paired with a “two-way sweep tool” that will move money in and out of a user’s third-party bank account, taking funds when the algorithm determines there is spare cash, and returning funds when a low account balance is detected.