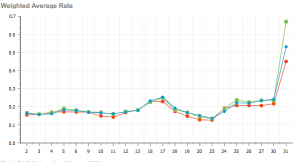 Widespread media coverage of end of quarter UST repo rate hikes, but this is the new normal

Pretty much all the big media outlets covered US Treasury repo spikes at the end of the quarter. The data from DTCC’s GCF repo tell the story well for intra-broker trading activity. Repo rate spikes and volume reductions at end of quarter are news, but they are also very expected. We noticed a few things in the story lines and report back on our own expectations about what a fully costed LCR means for repo pricing.

The DTCC data show the dramatic end-of-quarter change, at least for the GCF repo market: UST rates hit a weighted average of 45 bps on March 31 (see Chart). We’ve seen this at previous quarter ends already. We’ve also seen that repo in the bilateral market may be 0, negative or unavailable. So what’s going on here? The demand for UST by mid-tier and smaller broker dealers is intense. The largest BDs typically use the GCF market to lend to smaller firms. There appears to be a genuine scarcity in the market as firms look to clean up their balance sheets for reporting. We are not yet seeing the impact of monthly reporting requirements; the scarcity appears to be driven by quarterly reporting (and also the Japanese end of year). Volumes dipped a bit on March 31 but ultimately climbed again to US$105 billion. So the supply is out there in the BD market at a price on the right clearing venue.

The Reuters story caught the LCR angle: “Analysts said banks especially were reluctant because they wanted to avoid adding assets to their books, which would require them to set aside additional capital.” Reuters also reported a high points of 58 bps for UST repo. The Wall Street Journal had the number at 50 bps according to ICAP.

Bloomberg noted that the Fed’s decision to move Reverse Repo Facility transactions to the morning set off another kind of chain reaction. The Fed could not be looked at as the lender after everything else was done. Instead, money funds went there first to ensure they had supply. “The allotment at the central bank’s overnight fixed-rate reverse-repurchase program Tuesday morning was $202.2 billion at a rate of 0.05 percent. The Fed had previously announced that its one-day agreements would take place in the morning, as opposed to the typical afternoon timing.” Again from the WSJ: “There are now $378.5 billion in repos outstanding in the Fed’s program, on par with the $396.7 billion as of year-end.” Check out the growth in quarter end volumes over the last two years (see Chart).

An interesting LCR point in all this: in mid-last year, the hypothetical cost of a fully costed in Leverage Ratio and LCR to repo was 60-70 bps. More recently we’ve heard that figure at 40-50 bps. That doesn’t mean that we’ve seen any bank put this cost in explicitly, but that was the expectation. Now in quarter end where presumably banks are most sensitive to capital ratios, UST repo on DTCC has shot up by 33 bps from its low in March to the end of the month. This suggests to us that capital ratios are factoring more prominently in to pricing at the most critical times.

The press will follow and extoll the new highs and lows, but the fact is, these moves are more like the new normal than an outlier.