Fintech and bigtech platforms have expanded their lending around the world. Credit markets around the world are undergoing a deep transformation. While banks, credit unions and other traditional lenders remain the chief source of finance in most economies, with capital markets playing an important role in some cases, new intermediaries have recently emerged. In particular, digital lending models such as peer-to-peer and marketplace lending have grown in many economies in the past decade.

These types of credit, facilitated by online platforms rather than traditional banks or lending companies, are referred to as “fintech credit”. Moreover, in the past few years, many large companies whose primarily business is technology (bigtechs) have entered credit markets, providing “bigtech credit” either directly or in partnership with financial institutions.

They find that in 2019, fintech and big tech credit (together “total alternative credit”) reached nearly $800 billion globally. Bigtech credit has shown particularly rapid growth in Asia (China, Japan, Korea and Southeast Asia), and some countries in Africa and Latin America. By contrast, fintech credit volumes declined in 2018-19 due to market and regulatory developments in China. 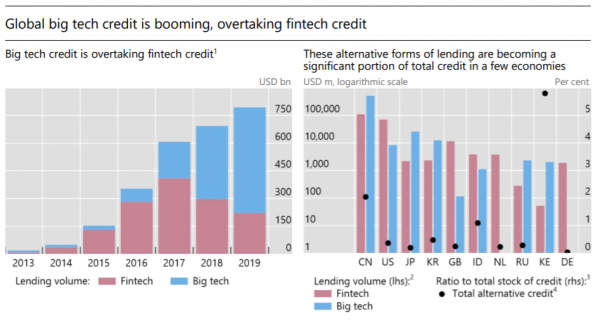 They find that these alternative forms of credit are more developed where the ease of doing business is greater, investor protection disclosure and the efficiency of the judicial system are more advanced, the bank credit-to-deposit ratio is lower, and where bond and equity markets are more developed. Overall, both fintech and bigtech credit seems to complement other forms of credit, rather than substitute for them,­ and may increase overall access to credit.