The Depository Trust & Clearing Corporation (DTCC) outlined a three-prong plan to further harmonize derivatives trade reporting requirements and deliver against the objectives that were originally established by the Group of 20 (G20) at its historic 2009 summit in Pittsburgh.

“OTC derivatives trade reporting standardization would enable regulators to reach the level of transparency and global risk monitoring identified as critical by the G20 summit, but has been a challenge to achieve for individual jurisdictions,” said Chris Childs, DTCC managing director and head of Repository and Derivatives Services, in a statement. “With several trade reporting rule sets currently under regulatory review, now is the time to work together and continue to progress against these objectives, and more specifically, to align individual jurisdiction trade reporting rules to facilitate global market transparency.”

Several regulatory bodies are now embarking on the adoption of critical data elements (CDE) for derivatives trade reporting as identified by the Committee on Payments and Market Infrastructures (CPMI) and the Board of the International Organization of Securities Commissions (IOSCO) working group on harmonization (Harmonization Group).

The CDE initiative was designed to promote the data harmonization critical to enabling data aggregation and systemic risk transparency. However, disparate adoption of the CDE and other reporting standards across jurisdictions will hinder the achievement of the G20’s risk mitigation objectives, and create complex implementation burdens for market participants. 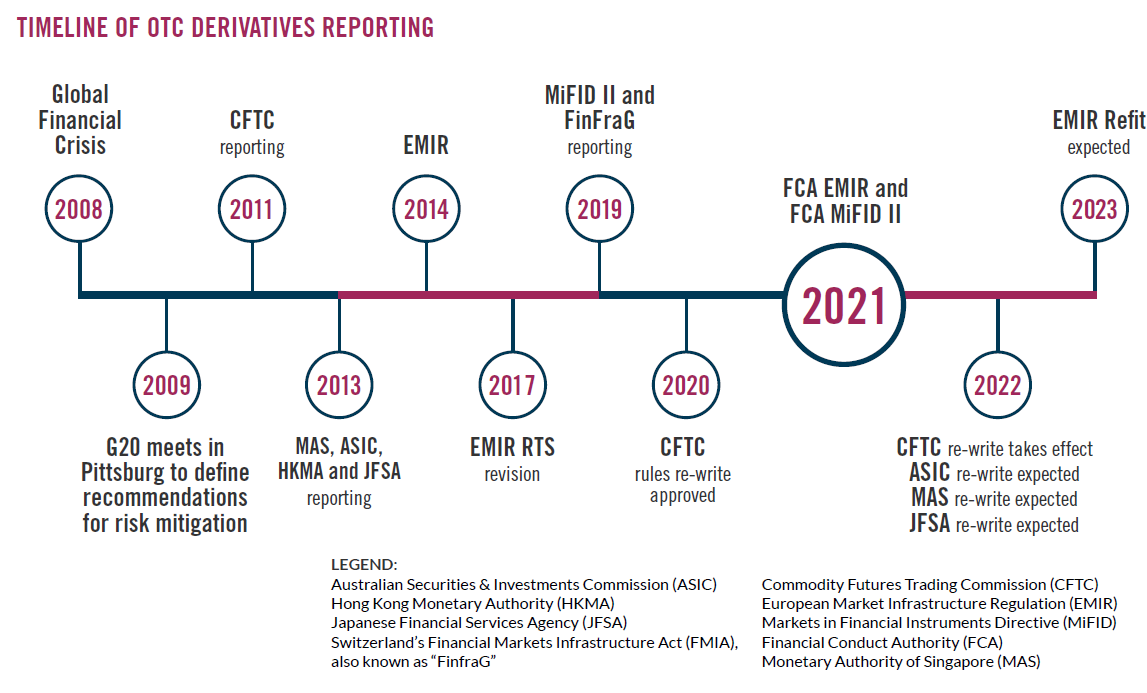 Within the paper, DTCC outlines three steps the industry should take to improve in this area and advance toward the transparency and systemic risk monitoring goals envisioned by the G20.

1. Cross-jurisdictional differences: the industry, regulators and other key stakeholders must work together to eliminate cross-jurisdictional differences in the adoption of CDE trade reporting requirements to avoid ongoing re-harmonization efforts and future regulatory amendments. This would involve paring down the CPMI IOSCO list of 110 CDE to only the most important elements that then can be aggregated across jurisdictions.

2. ISO 20022: with the help of ISO 20022 Derivatives SubSEG working group, the industry must finish the ISO 20022 CDE message scheme for OTC derivatives, setting a definitive timetable for completion, and universally adopt a single ISO 20022 message as the common data standard and format for reporting to trade repositories. A common messaging standard would help drive data consistency across trade repositories and jurisdictions.

3. LEI ROC: the industry must furnish the LEI ROC with adequate resources in order for it to successfully serve as the central governance body for CDE, universal product identifiers (UPI) and universal transaction identifiers (UTI), as designated by the Financial Stability Board (FSB) on October 1, 2020.

Childs said in a statement: “It is critically important that we embark on these efforts now and capitalize on this unique moment to enhance systemic risk mitigation before market participants begin their next round of updates to conform to the latest rules revisions, some of which are projected for implementation in 2022.”

ESMA provides 12 month extension on LEIs for non-EU counterparties under SFTR
6 Jan 2020
No Comments
IOSCO says jurisdictions making progress on standards for payment, clearing and settlement
14 Mar 2019
No Comments
ISDA says the New York Times got it wrong about MF Global: it was repos and not derivatives
15 Nov 2011
No Comments