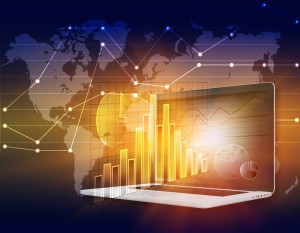 eBonds: combining a corporate bond and a CDS. Hey, what could possibly go wrong?

A February 3, 2015 article in Bloomberg “Meet the 80-Year-Old Whiz Kid Reinventing the Corporate Bond” by Edward Robinson caught our attention. It described a “new” product called “eBonds”…only its not really so new.

The article is about John “Mac” McQuown, who has invented a financial instrument that combines corporate bonds and CDS protection on the underlying instrument.

“…His latest handiwork is a hybrid security that embeds a credit-default swap, the derivative that helped push the global financial system to the edge of ruin in 2008, in a corporate bond.

By joining the two securities into an instrument called an “exchangeable bond,” or eBond for short, McQuown says companies will be able to transform junk-graded debt into the equivalent of AAA-rated notes.

And he’s hoping it will help him take advantage of possibly the biggest imbalance he’s seen in a career that stretches back to the dawn of quantitative investing — a looming liquidity crunch in the $8 trillion U.S. corporate bond market. McQuown says reinventing the corporate bond to make it less risky should make it easier to trade…”

Below is a chart of the flows: 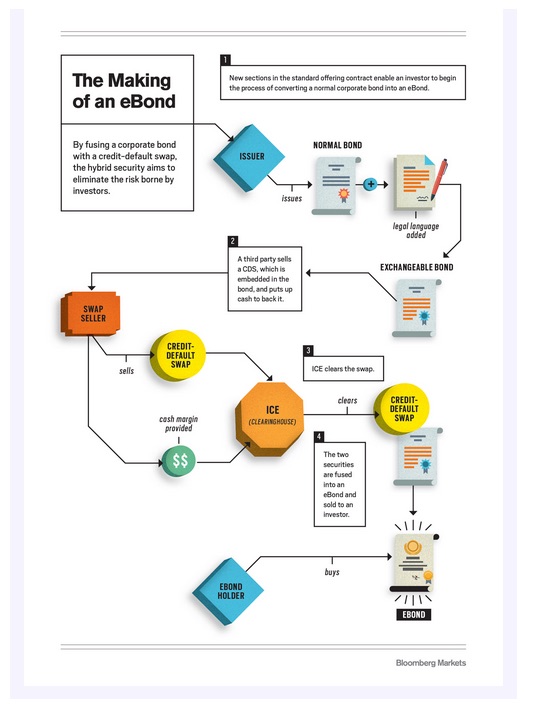 So this is a basis trade: buy bonds, buy protection at a rate that is cheaper than the bond earns, and take the spread. What could possibly go wrong? Isn’t this a risk free arbitrage? Well, not really. The Bloomberg article focused on the advent of central clearing for CDS and the lack of liquidity in the corporate bond market. eBonds could take advantage of central clearing and get around the liquidity issue. Wait. Yes, clearing the CDS will reduce the counterparty risk that was otherwise embedded in bilateral derivative trades. But will a structured asset like eBonds have any liquidity when something hits the fan?

We are very skeptical.

Our own Josh Galper was quoted in the article:

“…There’s a lot of action, a lot of experimentation, in the market now,” says Josh Galper, the managing principal of Finadium LLC, a finance research firm based in Concord, Massachusetts. “But innovation does not always reduce risk — it just moves it around…”

The liquidity problem in corporates is a function of a broken secondary market, largely driven by bond dealers backing away from holding inventory and no longer using proprietary books to take on complex positions. The fear is that when the music stops, and investors want to sell, there will be no market depth. “A mile wide and an inch deep” is the term coined by Will Rhodes. Is the argument that eBonds will be “risk free” instruments given the CDS protection and therefore more liquid in a high stress period? The financial crisis was littered with examples of that theory gone wrong.

The buy bonds / buy protection trade lost dealers billions during the financial crisis. There is no mention of that debacle in the story. Why did the bond basis, which looked like a sure thing if ever there was one, not really work out? One reason had to do with repo. Dealers (and the other leveraged investors who had the trade on in size) had to finance their bond positions. Repo availability disappeared on corporates or was only available at higher haircuts. This created selling pressure on the underlying bonds that transmitted to rapidly widening spreads on the CDS. We wrote extensively about this in a February 2012 Finadium paper “The Credit Default Swap vs. Repo Trade”.

But eBonds don’t rely on the kindness of repo traders – the paper is bought and paid for. This does not mean the CDS will be immune from repo market gyrations. Dealers found this out the hard way in 2008 and 2009 when cash bond spreads widened out a lot faster than CDS spreads did, losing a lot of money in the process. Won’t an eBond will reflect that same dynamic?

We have a question about how the CDS will deal with margin. Where is the initial margin coming from? The diagram says the swap seller is putting it up. Won’t they be looking for the client to foot that bill? More importantly, where is variation margin coming from? Will the structure hold a cash reserve to pay for margin calls and, if so, how much? What happens if it is exhausted?

If the underlying corporate bonds depend on repo to raise liquidity that is probably not the best idea we’ve heard. It also links the structure back to the depth of the corporate repo market. All those haircuts and margin can’t be netted, so it will be cash out of someone’s pocket and reduce the yield accordingly. Finally, CDS is LIBOR based while most bonds are fixed rate. This adds the need for a swap with all the transactions costs that implies.

We have seen this “it’s a risk free deal” movie before and it did not end well. Maybe McQuown, who is well known as a quant before the term existed and a father of stock indexing, has figured out how to do it correctly this time. Right now it looks an awful lot like the same idea that failed in 2008.

Previous Post
Is the market moving towards collateral management utilities? (Premium Content)
Next Post
The FSB looks at their 2015 agenda; they aim to finish what they started