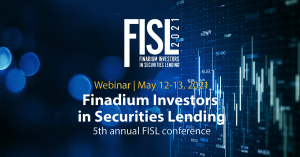 Finadium’s Investors in Securities Lending conference is fast approaching. Our panelist experts highlight a few key issues about how cash reinvestment and interest rate strategies are shaping up.

Over his 35-year career, Jeff Petro, senior vice president and head of Money Market Trading at Federated Hermes, has seen his fair share of upheaval and big changes. Petro also manages the securities lending program and is a member of the New York Fed’s Tri-Party Repo Infrastructure Task Force.

Prior to the financial crisis, repo was part of a system of reserves and relationships built on best execution and market levels. Then, dealers found themselves flush with excess reserves and a new balance emerged: dealers wanted to keep commercial paper and CD markets consistent, and asset managers needed to place cash and get collateral.

“The relationship between dealers and investors have strengthened and become more core and more predictable than ever,” said Petro. “They don’t just move around because of a basis point (and) certainty is something the investor and dealer needs when it comes to funding… When push comes to shove, we know that we both have a civic responsibility to support each other in these markets and I believe that that goes on today.”

That has also meant that the very definition of “cheapest to deliver” is changing, and a far more nuanced calculation is determining what that might mean. Petro puts it this way: “We look at the wallet of what we spend versus what (the dealers’) presence is in the market.”

In 2016, money market reforms contributed to the changing nature of how things work, which Petro said has translated into hybrid programs combining government and prime reinvestment vehicles.

The cash reinvestment situation now, he noted, is “probably the darkest before the dawn” as money continues to leave the treasury cash balance into the front end of the market and hit funds. The Fed is not indifferent, and has made a strong stand against negative rates and shown willingness to tweak short-term operation rates, among other tools, said Petro: “This is not the time to be reaching out the risk curve, the duration curve to attempt to gather additional incremental income based on your cash collateral reinvest.”

The amount of cash in the system versus a dearth of investable assets is the biggest current challenge in the money market space, said Brad Pedersen, director of Securities Lending Cash Reinvestment at Northern Trust.

Securities Lending is part of Northern Trust Capital Markets, which includes institutional brokerage, foreign exchange and transition management. Client needs are evolving and there is a clear convergence between financing, liquidity and collateral as asset owners and asset managers start to think holistically about inventory optimization, Pederson noted.

2021, he said, is “shaping up to be a tale of two halves”, with the current imbalance corrected to some extent post the end of July, when the current US debt ceiling extension is set to expire – a date that has been a big driver of the influx of cash, he explained: “To ride out the current challenges, we’re focused on positive yielding investments, but not going too far out the curve so we can take advantage of maturities that will occur during that second half of the year.”

“Given that we see the likelihood of this overnight rate upward adjustment as a distinct possibility in the near term, or at the minimum as a risk to be mitigated, our focus on floating rate securities and shorter dated maturities has become a larger focus of our portfolio construction,” he added.

In the current long-term low interest rate environment, there’s a “clear delta” between secured and unsecured investments, said Brad Fryer, executive director of Agency Securities Lending at J.P. Morgan: “On the secured side, there has been a premium for repo, and particularly less traditional collateral.”

At the bank, cash collateral reinvest is handled and managed as part of Securities Services rather than within Asset Management, and Fryer noted that the majority of his agency lending unit’s cash reinvest is in separately managed accounts.

His team is watching out for a variety of events that could disrupt the market, among them: lack of supply and spread on the unsecured side, lack of collateral and tighter spreads on the secured side, the summer debt ceiling, bill supply, and any technical adjustments from the Fed.

The conditions that could see the Fed tweak interest on excess reserves (IOER) seem to be coming into place, and if the Fed’s effective rate (EFFR) and overnight rate (OBFR) start to trade closer to the bottom of the range, the central bank could increase those rates by some 5 basis points at a time, said Fryer.

“Funding costs in securities lending are often driven or derived from some collection of those rates,” he explained. “Being mindful of what a technical adjustment means to your funding costs is very important when you’re carrying a mismatch between your funding cost and your reinvestment.”

Funding cost is just as important as yield, he noted, adding that in securities lending investors should focus on spread and optimization. Securities lenders have levers, Fryer explained, and if the spread to create versus cash doesn’t justify the duration mismatch, an alternative is a trade without a mismatch, which is usually a non-cash transaction.

Fryer also referred to how spread and funding cost interact when repo goes negative, which has been the euro case for years now. “If repo trades negative, it’s probably fine because your funding cost is probably more negative and still creating a spread. And if it is not, you unwind it,” he said. “We are heavily liquid, and we can likely end the trade and just reduce the cost there.”

“Replumbing Our Financial System: Uneven Progress” by Darrell Duffie: turn tri-party clearing into a "dedicated regulated utility"
22 May 2012
No Comments
Agent lenders and prime brokers could be “systematic internalisers” under MiFID II
1 Feb 2017
No Comments
Finadium: ESG is Changing Capital Markets: Services, Revenues and Outlook
20 May 2020
No Comments