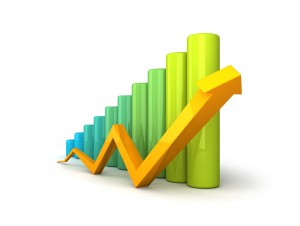 Early this month the BIS released “Statistical Release, OTC derivatives statistics at end-December 2014” (April 2015). We take a look at some of the numbers.

The highlights from the report were:

We think that notional amounts are not terribly instructional (and have said so before). Notional numbers make good sound bites. A quick search of “$600 trillion” and “derivatives” came up with these dittys:

“…$596 Trillion! How can the derivatives market be worth more than the world’s total financial assets?…”

Gross market value, defined as “the cost to replace all outstanding contracts at current prices” is a better metric. It is interesting that it rose by 23% in the second half of 2014 to $21 trillion. The figures in this graph (and the next one) are in US$. Non-US$ trades were converted at the appropriate FX rate at the end of the observation period. Gross credit exposure is an better still. It takes Gross Market Value and subtracts the impact of netting (when there are legally enforceable agreements in place). The most recently figure reported was $3.4 trillion, up from $2.8 trillion at the end of June 2014. But Gross Market Value does not account for the value of collateral collected against that exposure. That is a number we’d like reported in detail by the BIS. How much collateral is cash? HQLA? Corporates? One interesting statistic is a look at bilateral OTC interest rate derivatives trades between dealers. The numbers have fallen steadily over time. $70 trillion at the year-end 2014 versus $189 trillion at June 2008. This compares to trades with other financial institutions, including CCPs, of $421 trillion at year-end 2014 (equal to 83% of all outstanding contracts). However, one should keep in mind double counting. From the report:

“…The shift towards central clearing exaggerates the growth in notional amounts for other financial institutions because, when contracts are cleared through CCPs, one trade becomes two outstanding contracts…”

There is a wealth of data in the report, including numbers on credit default swaps, equity-linked, commodity, and foreign exchange derivatives. We recommend readers take a look.

The securities finance CCP premium – an example from the US repo market (Premium Content)
12 Nov 2014
No Comments
CPMI and IOSCO consult on CCPs’ practices for addressing non-default losses
4 Aug at 11:25 am
No Comments
Axoni's blockchain for equity swaps brings prime brokers closer to their required new target model (Premium)
20 Oct 2016
No Comments