Singapore’s central bank, Monetary Authority of Singapore, released a report on the DvP-on-DLT project, which is an extension of Project Ubin seeking to achieve interledger connectivity and settlement finality for Singapore Government Securities (SGS) with central bank-issued cash-depository receipts (CDRs) on separate DLTs. Along with MAS, the report was developed with the contributions of Singapore’s exchange (SGX), Anquan Capital, Deloitte and Nasdaq.

To examine possible DvP settlement models and interledger interoperability, prototypes of different DLTs with
varied capabilities and features were developed. These prototypes allow the transfer of tokenised assets such as
SGS and CDRs on a trade-by-trade basis.

In addition, smart contracts for DvP could enable the consistent and coherent implementation of rights and obligations that will increase investor confidence and reduce compliance costs in the market.

The paper explores how DvP settlement finality, interledger interoperability, and investor protection may be
realized using specific solution designs. In addition, it will highlight some future considerations for DvP-on-DLT and
its impact on capital markets.

It also looks at the private and public blockchain platforms employed by the appointed technology partners – Anquan Capital, Deloitte, and Nasdaq – to create the prototypes used in this project. 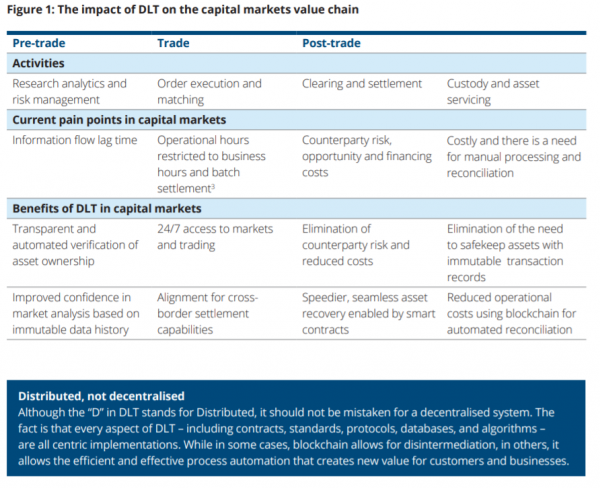 Previous Post
DLT and large value payments: a global game approach
Next Post
“What Should Repo Expect from SOFR?” Our presentation from Rates & Repo 2018 (Premium)